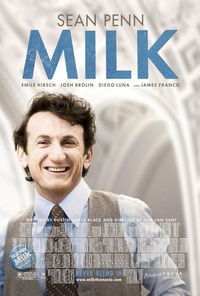 Milk is the Gus Van Sant directed biopic about the rise and ultimate death of openly gay politician Harvey Milk, in 1970s San Francisco.  Facing discrimination as a gay business owner, Harvey Milk (Sean Penn) seeks to change things by running for San Francisco city supervisor. With his partner and campaign manager Scott Smith (James Franco), Milk manages to lose a few elections over the next few years, but he grows his influence and is seen as a political figurehead for the oppressed gay community.  But soon he is able to get a grassroots campaign that works well enough to push him over the edge, and win the position.  Not a natural politician, Milk finds that he has to make alliances - including that of San Francisco Mayor George Moscone (Victor Garber), and the emotionally conflicted City Supervisor Dan White (Josh Brolin).   When singer Anita Bryant and her group of conservative Christians successfully remove gay rights in Florida, Milk senses a coming storm.  The last half of the film focuses on Milk\'s efforts to prevent passage of Proposition 6, which would have fired gay (or even gay-friendly) teachers - and how his inspiration was able to reach people all across America.

Given the current controversy over passage of Proposition 8 in California, Milk seems somewhat prescient considering that the events portrayed took place 30 years ago and yet there are so many parallels.  With a slow but steady pace to the film, with clever use of archival footage, Van Sant portrays Milk as a sympathetic figurehead who just wanted to do what he felt was right.  Dustin Lance Black\'s screenplay is presented in typical biopic fashion, allowing whole sections of speeches to be replicated nearly verbatim, and just bringing us through the narrative of what happened.  There doesn\'t seem to be too much creativity in that regard; we\'re just taken from event to event, as told through the narrative frame of a flashback.

Acting-wise, for a film that strives to showcase some great performances, only a few stand out.  Penn delivers a powerful and excellent performance, one that shows his versatility as an actor (especially when contrasted with his role as corrupt politician Willie Stark in All the King\'s Men).   Brolin\'s performance as the strongly conservative Dan White is an equaly solid one, but not as fleshed out and three-dimensional as Milk\'s.  Unfortunately there are a few times where the actors seemed to play to stereotype - including Emile Hirsch as street-hustler-turned-campaign worker Cleve Jones, and Diego Luna as Milk\'s jealous lover, Jack Lira.

Danny Elfman\'s emotionally tinged score feels like blend between Good Will Hunting and To Die For, and is certainly one of his better efforts for Van Sant. The feeling one gets when leaving a film like Milk is that there is a lot more to Harvey Milk\'s life and influence than was able to be captured on screen.  The film is good, but not great, and yet it wants you to believe it is great.  In the end, it gets a bit too wrapped up in itself for its own good, and is held back by the narrative.  Worth a look for Penn\'s performance, but otherwise, I\'d wait for video.