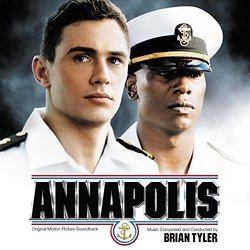 The latest effort by composer Brian Tyler showcases his ability to score for any film genre. For Justin Lin\'s Annapolis, Tyler gets a chance to flex his militaristic muscles. The style of the score resembles bits of Tyler\'s other work, namely the brass from Timeline and the electronics from Paparazzi and The Hunted. Tyler introduces a powerful main theme in the opening cue "Annapolis" that he reprises throughout the album. The soundtrack album from Varese Sarabande runs over an hour long, and the tracks are not in the exact order of the film.

There are two types of music in this score besides the expected underscore: fast electronic beats and orchestral action or anthemic cues. The former are necessary for a modern military-training film, but are not especially interesting on the album (examples are "A Little Jog" and "Math Problems"). On the other hand, some cues incorporate the orchestra into the electronic cues for a fast paced action cue, as in "Brigade Training". The second style of cue is what gives this particular score its character and do justice to the name Annapolis. Like the opening track, these cues generally contain the main theme and are sweeping orchestral cues with brass and racing strings that elevate the patriotic feel of the film. Examples are "Naval Academy" and "Gates of Annapolis". There is a musical motif, as well, for Jake (James Franco), which consists of a version of the main theme on the electric guitar and is used in "Jake", "I Have Nowhere Else to Go" and "Holiday Leave".

The highlight of the score, however, is from near the end of the film, though it appears as the third album track, "Showdown". For this cue, Tyler was given an unusual responsibility in that half of this cue plays over a scene in the film that has no sound because Jake was hit in the head during the boxing match. Therefore, Tyler\'s music had to replace the sounds of the fight with constantly shifting cues and also keep a fast pace for the film. This latter task is done nicely by a series of racing string countermelodies. Percussion is used to highlight the fight and leave the tempo to the strings, and the brass is featured most prominently in this cue. Nearer the end of the scene, when the sounds of the fight return, a faster statement of the Annapolis theme is performed by the high brass and then a final reprise ends the cue with the full orchestra. One of the first major scores to be released in 2006, this cue, which is reprised in the end title suite, single-handedly makes this score worth checking out.

Brian Tyler has demonstrated his unique musical creativity in his past projects like Children of Dune, The Hunted, and Final Cut. Because of this, scores for films like Annapolis or The Greatest Game Ever Played, which are films in well-established genres, come across as less original. The main theme and the cue "Showdown" surely make this album a great listen, but to be fair, it has a lot to stand up to, given some of Tyler\'s other recent work. I greatly look forward to his next efforts, as 2006 has only just started.