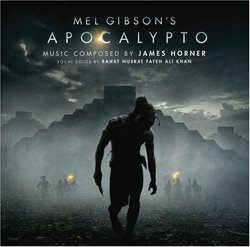 Apocalypto, the new film by Passion of the Christ director Mel Gibson, reunites the director with composer James Horner, who had worked with Gibson previously on Braveheart and The Man Without a Face. The film is about a Maya tribesman, Jaguar Paw (Rudy Youngblood) and his journey from the jungle (where he lived with his expectant wife and son) to the Maya city, where he was to be sacrificed after being captured by a ruthless tribe, and then his escape back to the jungle where he tries to outwit and outlast his pursuers and return to his family. The story is simplistic, but allows us to get a glimpse into a world never truly explored on film with such accuracy and graphic detail. Exceptionally violent at times, Apocalypto is essentially a chase film, but there is enough emotion to the characters that we can relate to them - even though the whole film is spoken in an obscure Mayan dialect. Horner\'s score aids the emotional journey that Jaguar Paw takes, as well as effectively providing tension and energy during the lengthy chase sequences.

Eschewing a traditional orchestra for synthesizers and plenty of solo instruments, Horner creates a rather unique primal sound palette that sets the score deep in the jungles of the Maya empire. Adding to this is the use of Qawwali singer Rahan Nusrat Fateh Ali Khan, who had worked with Horner previously on The Four Feathers. Khan (along with vocalist Terry Edwards) provides a variety of vocal effects, from throat singing, chanting, wordless wailing, and more. The album is bookended by two tracks ("From the Forest..." and "To the Forest...") which contain subtle sound effects of the jungle, much in the same way that Horner opened his album for The New World. Fans might find it distracting, but I find it draws the listener into the world of the music.

Amidst the percussion-heavy action cues, Horner does manage to create at least two recurring themes: the "Jungle Theme", heard primarily on wood flutes ("The Games and Escape") and pipes ("Frog Darts", "No Longer the Hunted"), and a love theme for Jaguar Paw and his family ("Holcane Attack", "Words Through the Sky - The Eclipse", "Civilisations Brought By Sea", "To the Forest..."). There\'s a primal simplicity to these melodies, but they work well, and even have a touch of Horner\'s distinctive and instantly-recognizable writing style.

The synth strings and brass might have been more effective if they were performed with live musicians, but they are generally surrounded by enough solo instruments (pipes, drums, etc.) that it won\'t be as jarring or detrimental to the score as you might think. The score works quite well in the film, especially as Jaguar Paw and his fellow captives are brought through the various neighborhoods of the city before being brought to the pyramid to be sacrificed ("Entering the City with a Future Foretold"). The problem with the album is that the music worked hand-in-hand with the imagery, and we\'re lacking that when listening to the album. There are plenty of strong score moments on the disc, such as the brass in the finale of the film ("Civilisations Brought By Sea"), and this is a rather unique score when compared to Horner\'s recent works.

Within the context of the film, Apocalypto is a great score, doing everything that film music is supposed to do. Unfortunately that experience doesn\'t translate over to the disc, and what we\'re left with is a pretty decent listening experience that doesn\'t hold up as well without the visuals. It\'s a strong effort by Horner, and he is to be commended for it, but the music just won\'t satisfy as much when it stands alone.