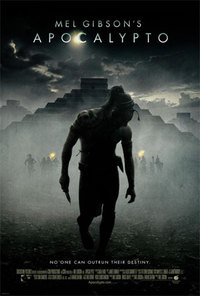 Mel Gibson\'s Apocalypto is a rather simple - yet exciting - story of survival set against the backdrop of the decline of the Maya civilization. Jaguar Paw (Rusty Youngblood) is a young hunter, living with his tribe deep in the jungle. He has a very pregnant wife and young son, and the village is a tight-knit community. One day, while hunting, they encounter another tribe, who is asking permission to pass through their territory. This tribe is beaten and in fear of something, and Jaguar Paw later has a dream foretelling him to "run". Shortly thereafter, their village is attacked, and after hiding his family in a hole, Jaguar Paw is taken prisoner along with his friends where he is brought to the large Maya city - to be a human sacrifice to help the dying kingdom regain its prosperity. He manages to escape, and uses his knowledge of the jungle to try to outwit and defeat his pursuers, and try to reach his family in time.

This isn\'t a film for the weak stomached. It\'s meant to depict a brutal slice of Maya life, and nothing is really held back. People are knived, speared, gutted, mauled, decardiated, beheaded, and more. Because the story is pretty basic, we\'re relying on the characters to provide the substance. And they deliver - there\'s plenty of depth to their emotional journeys, so you can definitely believe what they\'re going through is affecting them. The only thing is, the violence is so overt, and so excessive, that it almost borders on parody. Yes, it\'s shocking, but it is so pervasive that by the time a warrior gets hit in the head and has a spurting arterial wound, you\'re almost laughing because it looks like something out of a Monty Python sketch.

The entire film appears to take place during the Classic Maya period, which was around 1000 AD. Unfortunately, this idea is scrapped for the final moments of the film, which suggest that the film takes place in 1502, when the Spanish first encountered the Maya, during Columbus\' Fourth Voyage. At that time, the Maya were already in decline, and the large city cultures portrayed in the film were no longer the powerful forces they once were. But these errors won\'t really affect our enjoyment of the film.

The film was shot digitally, and on the DVD the film is given a nice transfer (undoubtedly directly from the digital masters), and there is nary a speck of dust. The digital approach is evident primarily in sequences with a lot of motion - there appears to be a bit of "smearing" - but otherwise, you wouldn\'t know that it was a digital film. Dean Stemler\'s cinematography looks fine, and goes for a more realism-based style as opposed to the great look that Caleb Deschanel had for The Passion of the Christ.

Like Gibson\'s previous film, The Passion of the Christ, Apocalypto is a foreign language film. In this case, it was filmed entirely in a Mayan dialect - presented in both Dolby Digital and DTS, and subtitles are offered in English, French and Spanish. James Horner\'s unconventional score is a mixture of strings and occasional brass, with tons of percussion and ethnic instruments. It\'s primal and instinctive, and with vocalizations done by Rahat Nusrat Fateh Ali Khan, it\'s got a pretty distinctive musical palette going on, and sounds great in both tracks.

As far as extras go, the pickings are rather slim, but satisfying. The highlight is the feature-length commentary by director Mel Gibson and screenwriter Farhad Safinia. The two get along splendidly, and provide a wealth of information about the research that went into writing and making the film. Of particular interest were the discussions about casting, location scouting, and the city sequences. Towards the end of the credits, things get a little "punchy" and it\'s a funny way to end the commentary. One deleted scene is included, with optional commentary - which was clearly done after the feature, since the joking mood is carried over.

The only other extra is a featurette that runs under 30-minutes, "Becoming Mayan: Creating Apocalypto". This skims the surface of making the film, and while it provides some really interesting detail, there are a few areas that could have been explored in more depth. The lack of any mention of the visual effects or music is disappointing. Also missing from the package are the theatrical teaser and trailers, which would have been nice to have included.

Apocalypto is not a film for everyone. It\'s violent and unrelenting, but at the same time a warm and touching film about a man\'s journey to reunite with his family against terrible odds. It\'s also one hell of a chase.