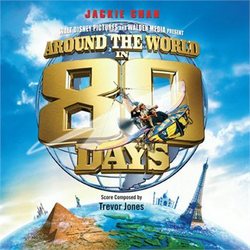 Around the World in 80 Days

Review: Around the World in 80 Days

Disney's latest attempt at live-action filmmaking moves Jackie Chan into the limelight in this retelling of Jules Verne's adventure. Full of celebrity cameos and slapstick comedy, the film was criticized for its loose retelling of Verne's tale and for its historical inaccuracies. However, one thing the film did right was its cinematography and amazing shots of locations from around the world. Trevor Jones, a veteran of ethnic adventure film scoring (Last of the Mohicans, Merlin, Cleopatra), does an excellent job at portraying the various locations in the film and creating a musical journey across the world. From the accordion in "Rendezvous in Paris" to the ethnic vocals in "Prince Hapi Escape" and the koto in "Return of the Jade Buddha", Jones effectively captures the essence of the film in the music.

The score opens with "Around the World Overture" which immediately showcases the action-adventure feel of the music with a swashbuckling theme reminiscent of Debney's Cutthroat Island. This theme appears a few times with some short performances, such as on French horn in "The Balloon Chase" (which is followed by a humorous rendition of the Can-Can song). The score also features an interesting use of different music genres, such as waltz ("1st Class Waltz") and jazz ("Lost in America"). The action picks up in the second half of the album, with some great moments in "Agra to China" and "Lost in America." The score ends with a bang with "Exactly Like My Dream" with a full treatment of the main theme from the overture with the addition of a choir. One problem with the composing is that some of the music used as the temp score seems to bleed through as an influence on Jones composition. Two examples stand out: a cue in the last minute of "Prince Hapi Escape" that sounds quite similar to the action theme from Pirates of the Caribbean, and one of the western themes from John Williams' Far and Away at the end of "Lost in America." These orchestrations work well with the rest of Jones' score, and are not direct rips from the other scores, but they are a bit too similar to be coincidental.

The wide expanse of the ethnic soundscapes in the score - which is exactly what this film required - is also part of the problem with the album. Jones' previous adventure scores were held together by powerful and versatile themes that were woven and worked in throughout the scores. Because of the changes in locations in the film, the style of the music changes and the album feels almost like a compilation of world music rather than the soundtrack to a single film. However, Jones provided what the film needed and his music is so effective that one can imagine the locations in the film just by the styles of music. The score is consistently playful and adventurous with some brilliant cues for brass and unique orchestrations. Jones has written another impressive adventure score that fans of his previous work should appreciate.

There are three pop songs, thrust at the head of the album, including a cringe-inducing rendition of "It's A Small World", reggae-style, performed by the Baha Men. Start your listening experience at the fourth track, and you'll feel a bit better.