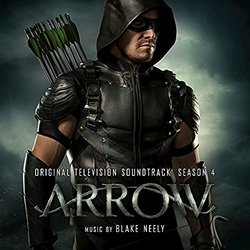 La-La Land Records, DC Comics and Warner Bros. Television presents an all-new collection of thrilling score music from the fourth season of the hit television series Arrow. Acclaimed composer Blake Neely once again captures all the drama and action that are hallmarks of the continued adventures of the famed hooded vigilante. Neely selected, assembled and produced this dynamic collection of Season 4's most exciting musical moments.

Produced by the composer, mastered by Stephen Marsh and heroically art-designed by Dan Goldwasser, this special release includes a brief personal note from the composer, is limited to 3000 Units and is a must for DC/CW fans and all movie/TV music enthusiasts!