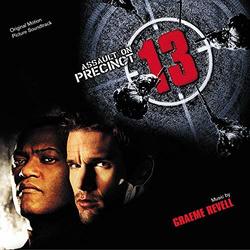 I have to begin by saying that Graeme Revell's score for Assault on Precinct 13 genuinely surprised me. Knowing works of his such as Tomb Raider, or the droning electronics of Open Water, I had expected a synth approach for this film. Many action thrillers of this genre receive electronic scores these days (The Recruit, Phone Booth, etc). But Revell also has composed some amazing orchestral scores, such as Titan AE and The Chronicles of Riddick. Regardless, I did not expect as large of an orchestral presence as there was in Assault on Precinct 13, and to be honest, it was great to hear.

Revell cuts the use of electronics down to a bit of percussion and background presence to create a harsher tone. There is a very large brass presence in the music, ranging from bold horns ("Burning Man") to mournful trumpet solos ("Hot Wire Girls"). The tracks seem to be a bit of out sequence from the film, judging from the titles, but most of the cues are similar styles of action/thriller music; the important placement is the last score cue, which is the finale. One track that stands out is "Bishop Arrest" which is a fast-moving heavy drum ensemble cue.

The main theme is introduced throughout the score as a quiet motif on the piano and strings and occasionally the brass, but is only developed into a full theme in the last cue, "Duvall Showdown". This cue pulls the whole score together and builds from the piano playing the theme into a fleshed out orchestral performance backed by percussion. Revell's orchestration here for the brass is awesome, and it is clear that he is a French horn player, himself. The album also contains two versions of a song by rap artist KRS-One, "Generique Assault", which was co-written and produced by Revell, so maintains the feel of the score. However, two versions of the song (one is just a radio edit) are unnecessary.