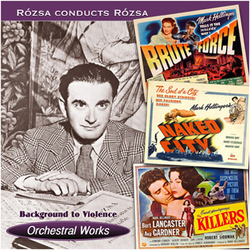 Following our reissue of A Time to Love and a Time to Die paired with Lust for Life Suite, we go on with other Miklós Rózsa works that were featured on the latter album, originally released on a Decca LP and subsequently on a Varčse Sarabande LP and CD: the suite Background to Violence.

In the original LP liner notes included, the composer expresses his view on his scores for the three "films noirs" of the late forties featured here. Let's add that even when Rózsa intends to be just "happy", in excerpts like Scherzo (Brute Force) and Epilogue (The Naked City), he actually lifts you off the ground with excitement, the same way as for a tense action-driven scene!

The Orchestral Works that represent the most important part of our program, and appear for the first time on CD, come from another LP that Rózsa recorded with the German Frankenland State Symphony Orchestra in 1957, reissued by Varčse Sarabande in 1978. Although these classical efforts have no connection with the cinematic world, film music fans will enjoy them thoroughly because Rózsa's style here is unmistakable.

One finds in the Concert Overture (1957), Three Hungarian Sketches (1939) and Theme, Variations and Finale (1933), the same ebullient passion and fierceness, the same generous and richly textured orchestrations that characterize the 95 movie scores that made Rózsa's name famous.

Miklós Rózsa's overall classical production (44 opus in all) has had enduring success, which is somewhat an exception for a popular film music composer in Hollywood, a three times winner of an Academy Award. Still, his own recorded renditions of the concert works gathered here have been nearly overlooked by the music industry, and this despite the fact that they prove to be superior in our view.

While Background to Violence is in stereo, the mono concert music album has been enhanced with a slight reverberation, all the content being transferred from mint vinyl sources. 12-page color booklet.