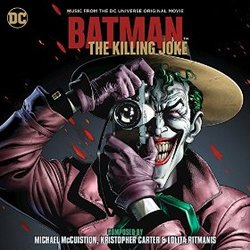 La-La Land Records, DC and Warner Bros. Animation present the original score to the DC Universe Original Movie Batman: The Killing Joke. Composers Michael McCuistion, Kristopher Carter and Lolita Ritmanis unleash a powerful, emotionally-charged score, expertly melding synth and live orchestral players to harness all the thrilling action and psychological drama within this exciting feature-length re-telling of what is considered by many to be one of the finest Batman comic stories of all time!

Produced by Michael McCuistion, Kristopher Carter and Lolita Ritmanis, and mastered by James Nelson, this special, limited edition release also features the original song "I Go Looney," performed by the Joker himself, Mark Hamill! Writer John Takis takes you behind the score with exclusive, in-depth liner notes (featuring interview comments from the composers) and the Gotham-infused art design is by Dan Goldwasser. This is a limited edition of 1500 units.