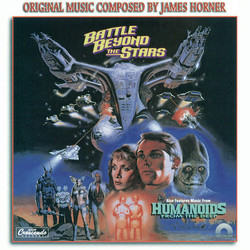 Battle Beyond The Stars / Humanoids From The Deep

Review: Battle Beyond The Stars / Humanoids From The Deep

The year was 1980. Burt Reynolds was the hottest thing this side of the sun. Ronald Reagan had yet to find himself on the business end of David Hinckley's .22 revolver. And with the help of a miracle called penicillin, people were beginning to pretend that disco never happened. So, before everyone joins me in giving a collective middle finger to an era most folks would probably rather forget, let's stop and reminisce about one of the few truly great things that happened then: after over a decade of being considered passé, the symphonic film score was enjoying a major resurgence thanks to a tiny little film called Star Wars. You remember Star Wars, right? It was that groundbreaking cinematic breath of fresh air that spawned all those horribly cheap imitations. (Ah, now I see where he is going with this!)

Okay, maybe that's a bit harsh. After all, everyone has to start somewhere. And it is undeniably impressive to see young Horner making so much out of his very limited resources at the time (and conversely disappointing to learn that he has tried his best to keep these recordings out of the public eye). These scores are arguably the wellsprings of the composer's hugely popular and oft-imitated style, and it shows in this historic document of the first time Mr. Horner showed the world his patented bag of tricks. But the proof is in the pudding. And while I would never deny Horner's later maturation into a fine musical craftsman, this particular pudding clearly owes an awful debt of gratitude to Goldsmith's monumental Star Trek: The Motion Picture and Alien scores, respectively.

The "Main Title" for Battle should be familiar enough to a lot of collectors (Corman admits to slapping it and other pieces here onto a dozen more of his Z-grade space epics), with echoplexing brass that faintly recalls Goldsmith's Patton. It's a fairly rousing theme, but it becomes very clear early on how this score nabbed Horner the Star Trek II gig, right down the replication of Goldsmith's Blaster-Beam effect. "Malmori Rear Guard" is Horner's answer to Goldsmith's pulsing Klingon theme, along with his earliest known cribbing of Prokofiev's Alexander Nevsky, a lick he has used so much over the years I don't doubt a lot of people think he wrote it. "The Battle Begins", "Shad's Pursuit", and "Destruction Of Hammerhead" are all vintage Horner action work, and should please his die-hard fans to no end. The brass work here greatly prefigures what would later become Krull, as does the lyrical "Love Theme". Additionally, his motif for "Cowboy And The Jackers" turns out to be a rollicking exercise in syncopated brass. The session players do their best, but Horner's lofty aspirations often get the better of them.

The "Main Title" from Humanoids also suffers from this kind of sloppy musicianship. The solo horn, clearly modeled after Goldsmith's robust and creepy Alien opener, has such a hard time keeping it together that the track inadvertently turns downright jazzy at points. The rest of the score consists of a lot of the atmospheric work that would later surface in the dissonant passages of Something Wicked This Way Comes and later, obviously, Aliens. Speaking of Aliens, it is interesting to hear throbbing action / suspense cues such as "Buck-O", "The Humanoids Attack", and "Final Confrontation" insofar as they seem to be at points a literal dry run for the 1986 Oscar-nominated effort. His beloved hammer-on-anvil effect (you know, the one all over Wolfen) makes a frequent appearance, only budgetary constraints have limited the sound to a rather dainty mallet-on-cowbell substitute. Also of note is the cue called "Jerry's Death". Just thought that was kind of funny, considering.

Hey, I don't mean to sound too snide here. I like me some James Horner, really I do. And this album is quite a cool little artifact. Considering the age of the material here, the CD's sound quality is impressive, without the bass and high-end rolloff that plagued the widely-available bootleg edition. Additionally, the colorful and informative liner notes are also well-aware of Horner's many "borrowings". So it's not like anyone's trying to put one over on us. All in all, this is a fascinating glimpse into the artistic beginnings of one of our most prolific and popular composers. Whether you're a hardcore Horner fan or just a score buff, this one is definitely a keeper. Just sit back, relax, and have fun trying to name all the subsequent movies that have been graced with the music James Horner first presented here.