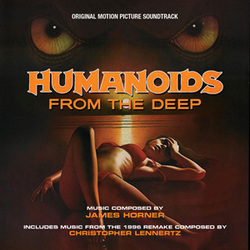 Humanoids From The Deep

Humanoids from the Deep was an early effort from composer James Horner and represented his first full sci-fi/horror complete score, his third score for New World Pictures and producer Roger Corman. Horner's music for the film remains a memorable and effective suspense score decades later, retaining many evidences of techniques he would later develop with more freedom in other scores, such as the percussion effects and reflective string techniques to generate suspense and the intertwining string writing and marauding use of percussion during the film's moments of action.

Previously released on a scarce compact disc by GNP Records in 2001, BUYSOUNDTRAX Records now presents a new release of the original motion picture soundtrack. In addition, we are including a suite of music prepared by composer Christopher Lennertz for the 1996 remake, also produced by Roger Corman, and directed by Jeff Yonis.

Finally, we conclude our release with a suite of outtakes in mono from James Horner's score, taken from the best available source, the isolated score track presented on the original laserdisc release of the film from Image Entertainment. The suite includes a different mix of the Main and End Titles music than appears on the original soundtrack album. The booklet features exclusive notes by author Randall Larson, including new comments by composer Christopher Lennertz. The music has been newly mastered for the highest fidelity possible by James Nelson of Digital Outland