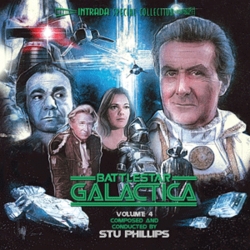 For the concluding volume in Intrada's series of Battlestar Galactica soundtracks, the focus is on the epic two-parters The Living Legend and War of the Gods. In The Living Legend, Captain Apollo (Richard Hatch) and Lieutenant Starbuck ( Dirk Benedict) discover the lost battlestar Pegasus—long thought destroyed, but saved thanks to the military genius of Commander Cain (Lloyd Bridges). But Cain quickly finds himself at loggerheads with Commander Adama (Lorne Greene) over the Cylon threat: Adama only seeks to hijack enough fuel to move the fleet to safety, while Cain wants to use their combined forces to attack the nearby vassal world of Gamoray.

Composer Stu Phillips uses two principal ideas to characterize Cain. The first is a jaunty military motif that emphasizes the commander's never-say-die attitude. The second is a melody based around ascending lines for Cain's romantic history with Cassiopeia (Laurette Spang), who is now entangled with Starbuck and working as a medic aboard the Galactica. For the two-parter's exciting action sequences, Phillips incorporates several of his space battle themes from the pilot, as well as the iconic Battlestar Galactica main fanfare and theme.

Phillips wrote a complete score for Part 1 of the story, but as with all prior episodes of the series (except the premiere movie), the elements retained by Universal are in the monaural format. Part 2, however, marks the point at which the music appears to have been vaulted in a "split mono" configuration that grouped sections of the orchestra onto separate tracks to facilitate minor balancing adjustments during the mixing process.

War of the Gods opens with another startling discovery when Apollo, Starbuck and Sheba find a strange planet with a crashed vessel and a lone survivor calling himself Count Iblis (English actor Patrick Macnee). The stranger rapidly seduces Sheba and positions himself as the fleet's savior. Soon it becomes the devil vs. angels in a battle of good over evil.

The interjection of angels and demons into the Galactica mythos enabled Phillips to draw on historic traditions. Iblis' main ideas—a creeping line and a more extended, spidery theme—are cloaked in dissonant harmonies and eerie tone colors. Electronics, contrabassoon and contrabass clarinet dominate. By contrast, pleasant harmonies abound, treating the mysterious light ships with a degree of ambiguity, in the form of darting minor-key arpeggios. But these are superseded by a theme of symphonic exaltation, later joined by a women's choir and finally appearing utilizing harps and strings to enhance the empyrean atmosphere.

As an added bonus, this volume includes Mission Galactica, which combined the two-part Living Legend with the next one-hour episode, Fire in Space. As part of the complex editorial process to put Mission Galactica together, a decision was made to re-record music for it. As most of it consists of cues from Part 1 of The Living Legend, presenting it on disc 1 after the complete original score offers the opportunity to hear a slightly different approach to the compositions—this time derived from split-mono-to-stereo elements.