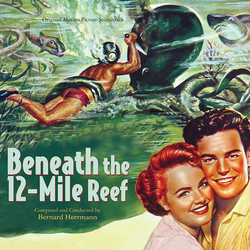 Beneath the 12-Mile Reef

Bernard Herrmann's score, in thrilling stereophonic sound, immediately drew audiences into its unusual musical soundscape, weaving an evocative spell with its incredible orchestral colors. The film may be standard issue drama, but it was those underwater sequences that held audiences in thrall. That and the completely unique Herrmann score.

To evoke the underwater world of Beneath the 12-Mile Reef, Herrmann employed nine harps, each with its own separate part. The score perfectly captures the mysterious underwater world—sinuous, hypnotic, flowing—a spellbinding tone poem that even today mesmerizes with its intense beauty. Since this was his first score to be recorded in multi-track stereo, Herrmann went so far as to include diagrams for instrument and microphone placement on his manuscript for the score. Needless to say, the resulting score remains one of Herrmann's greatest.

Beneath the 12-Mile Reef was available as an early Film Score Monthly CD. Several years ago it reappeared in the expensive Varese Sarabande Bernard Herrmann at Fox box, where the score had undergone an extensive restoration and remix by Mike Matessino. That box sold out very quickly and many fans missed out, so it's a pleasure to rerelease this amazing score by one of the greatest of all film composers in superb stereo sound.