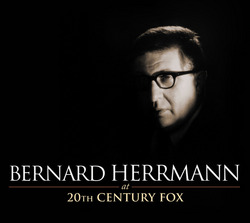 We've been celebrating all year long, premiering 5 CDs of music from The Alfred Hitchcock Hour, a deluxe 2-CD set of The Egyptian, and a thrilling concert in Tenerife at Fimucité 5. But now it is time for the grand finale of our 2011 Bernard Herrmann salute. And it's a whopper! We conclude our Bernard Herrmann centenary celebration with the most important chronicle of his music that has ever been assembled: Bernard Herrmann at 20th Century Fox.

Eighteen scores, representing an 18-year relationship with 20th Century Fox are all included here, and each one of them sounds better than they ever have before!

Four scores are making their premiere appearance. Never before have Herrmann's original recordings of The Snows of Kilimanjaro, White Witch Doctor, 5 Fingers or Hangover Square appeared on CD. But the premieres contained herein by no means stop with these four.

The collection opens with one of the most significant of all restorations. Jane Eyre appears in its entirety for the very first time, nearly doubling its previous length. Along with the significantly improved sound, the expansion makes this presentation a revelation in every way.

Anna and the King of Siam was already premiered in its entirety back in 2000, but has been remastered for inclusion here.

One of the most beloved Herrmann scores of all, The Ghost and Mrs. Muir, here receives its definitive presentation, featuring additional material, together with stunning new sound.

The bonus tracks for the landmark The Day the Earth Stood Still feature a particularly fascinating track allowing us to eavesdrop into the original recording session.

Discs five and six, featuring the premieres of 5 Fingers, Hangover Square (famous for its brilliant Concerto Macabre) and The Snows of Kilimanjaro are historic in their importance.

An expanded A Hatful of Rain shares disc seven with the world premiere release of White Witch Doctor, a score principally known (and much loved) thanks to its inclusion (in suite form) on the Gerhardt RCA album.

Beneath the 12-Mile Reef features improved sound but no new material.

The Egyptian was expanded for our Deluxe Edition earlier this year but disc nine here isolates just the Herrmann music from the famous score co-composed with Alfred Newman.

Garden of Evil has here been significantly expanded, adding some 15 new cues to what has been released previously.

Until now, King of the Khyber Rifles has been represented by only six cues on an earlier compilation. Presenting the entire score for the first time is a significant find.

While Blue Denim's previous release was already complete, Prince of Players is another score that is, essentially, a premiere here (and a major one at that) as only seven of the score's 29 cues have been released previously.

The Man in the Gray Flannel Suit expands from the eight cuts available previously to 21 here.

Our earlier release of Journey to the Center of the Earth was already pretty comprehensive, but we did add a few cues before remastering. The score is both a musical and sonic showpiece.

Eight cues have been added to Tender Is the Night, along with a few bonus cues.

All of this accumulates to a veritable mountain of Herrmann!

- a 108 page full-color, hardcover book featuring:
• an introduction by Robert Townson
• extensive notes on all of the films and scores by Julie Kirgo and Bernard Herrmann biographer, Steven C. Smith
• a huge selection of film stills
• rare recording session photos and a historic selection of photographs of Bernard Herrmann himself!

Easily ranking among the most historic film music releases ever assembled, Bernard Herrmann's body of work produced for 20th Century Fox is a priceless film music archive, all assembled in one place for the very first time.