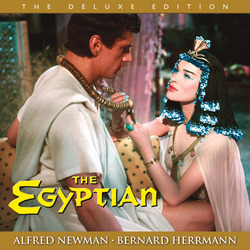 The Egyptian: The Deluxe Edition

Our celebration of Bernard Herrmann's 100th birthday (June 29) continues with one of the most important and unique assignments of his career. The 20th Century Fox costume epic The Egyptian (1954) not only gave Herrmann an exceptionally exotic canvas on which to work, it gave him a work partner—none other than the legendary, the great and powerful Alfred Newman. The Egyptian was first intended to be an original Alfred Newman score, but a schedule of merely five-and-a-half weeks—which included additional work needed on another picture—forced Newman to consider a co-composer. While it's almost impossible to imagine Bernard Herrmann agreeing to work with any other composer, the fact that it was Newman himself who needed help smoothed over any and all issues.

In 1990, Varčse Sarabande released a CD of the only score album that had ever represented this historic collaboration, but this was a studio recording done concurrently with the film's theatrical release. In 1998, conductor William T. Stromberg recorded a 71:00 album of music from The Egyptian with the Moscow Symphony Orchestra. In 2001, Film Score Monthly released a 72:00 CD of the music that had survived from the original film sessions. Now, finally, and for the very first time, we are thrilled to present the complete score from The Egyptian, adding more than 30:00 of previously-believed-lost music plus a selection of never-before-heard alternate cue variations. Taking advantage of both new mixing technologies and also a newly discovered source for the original music masters, we now have an Egyptian for the ages.

A classic and historic release long believed impossible has arrived!