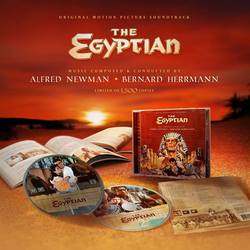 Two of the greatest composers cinema has ever known collaborate on what is considered by many to be one of the finest motion picture film scores of the 1950's. And now, thanks to restoration and revised mastering by Mike Matessino and mastering by Daniel Hersch, it sounds better than ever! Produced by Nick Redman, this 2-CD is limited to 1500 Units and showcases new, in-depth liner notes from writer Jeff Bond and powerful new art design by Jim Titus.