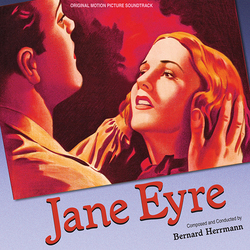 The 1943 film of Jane Eyre was a first-class affair straight down the line. The studio attempted to persuade classical composer Igor Stravinsky to make his film debut, but that didn't happen. Bernard Herrmann really wanted to score the film but didn't think he had a chance, but happily, Alfred Newman, head of the Fox music department, was a fan of Herrmann and he gave him the assignment, thus beginning Herrmann's long and brilliant association with Fox.

Herrmann could not have made a more auspicious debut at Fox than with Jane Eyre, a perfect marriage of film and composer. The score captures the Bronte world right from the main title, which, unlike today's abbreviated main titles, immediately draws you in and sets the tone of the film. His incredible string and reed writing is especially evident in this score, and his themes are simply stunning. The Herrmann musical signature is in evidence in every bar of the score—his music never sounds like any other composer and is instantly identifiable. Jane Eyre remains one of the cornerstones of his film-scoring career, as fresh, mysterious, beautiful, and vibrant today as it was back in 1943.

The score was previously released in the Varese Sarabande Bernard Herrmann at Fox box set, that sold out almost instantly. It's been great to be able to make so much of the contents of that box available in separate releases for those who missed out.