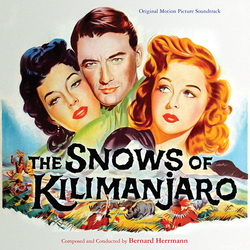 The Snows of Kilimanjaro

For The Snows of Kilimanjaro, there could not have been a better choice for composer than Bernard Herrmann, who gave the film his completely unique sound and sense of drama. Herrmann captures all moods of the story, from nostalgia to sadness to joy to romance. The music is achingly beautiful, most especially in the sublime "The Memory Waltz." As always with Herrmann, his orchestral colors are uniquely his own (as are his orchestrations), and even though with most Herrmann scores you can easily say it's one of his best, The Snows of Kilimanjaro is right up there with his greatest.

The Snows of Kilimanjaro was previously released as part of the Bernard Herrmann at Fox box on Varese Sarabande. This is the scores' first standalone release.