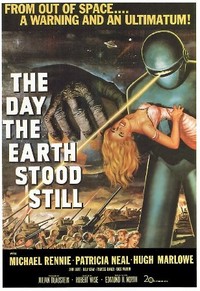 The Day the Earth Stood Still

1951\'s The Day the Earth Stood Still serves as an effective reminder - more than 50 years after it was released - of the need for man to achieve peace in order to survive. When a flying saucer lands in the middle of Washington D.C., the military is immediately deployed and a perimeter set up.  But for hours, nothing comes out of the ship - until it suddenly opens up and the humanoid Klaatu (Michael Rennie) comes out, offering peace and goodwill - but he is fired upon by a nervous soldier and injured, resulting in the emergence of the large robot, Gort, who immediately disintegrates all of the soldiers\' weapons.  Taken to Walter Reed Hospital, Klaatu wants to meet with all the world leaders to share his message of warning, but bureaucratic tangles make it impossible.  Wanting to live among ordinary people, against the secretary\'s wishes, he escapes, and under the name "Mr. Carpenter" goes to a boarding house where he meets the widowed Helen Benson (Patricia Neal), and her son Bobby (Billy Gray).  When Klaatu learns about the unnerving penchant for war on our planet, he reaches out to the scientist community, through the leading American scientist Professor Barnhardt (Sam Jaffe), to spread the concerns that the other plants have about Earth, because of the developments with atomic power.  Soon the race is on for Klaatu to deliver his message, before the military can capture him - and before Gort\'s fury is unleashed.

Okay maybe that last sentence is not a completely fair assessment of the film; there are a few moments of action, but for the most part, The Day the Earth Stood Still plays like a "Twilight Zone"-styled drama.  The message of the film, one that promotes peace and harmony against the risks of atomic war, resonates strongly even today.  Back in 1951, when the film was made, the Cold War was kicking into gear, and many American\'s were genuinely fearful of a third world war.  Director Robert Wise shot the film in a very realistic manner, as if it were a standard drama, and not a "science fiction" movie.  It\'s a well done film, and with a message of peace, and screenwriter Edmund North even sought to imbue a bit of Christ-like qualities in the character of Klaatu.

Released as a special edition laserdisc box set, and then subsequently on DVD, The Day the Earth Stood Still now hits Blu-ray in a new special edition that carries over some of the older extras, as well as providing a whole slew of new features.  The video quality of the film looks excellent; the theatrical aspect ratio (1.33:1) is windowboxed nicely in the 1080p frame.  Shot in black and white, the contrast is excellent, with deep blacks and plenty of detail in the whites.  There is a bit of grain and some speckling on occasion; this is not a pristine image, but it\'s definitely superior to the quality of the film as it appears in the trailers.  Audio is presented in 5.1 DTS Master Audio, but for the most part is in mono, which the film originally was released in.  The only sound coming from the rears seems to be Bernard Herrmann\'s evocative and groundbreaking score - and a few sound effects on occasion.  Fidelity is quite good though, and everything is clearly reproduced.

An archival feature-length commentary track by the late Robert Wise and Star Trek II director Nicholas Meyers is included, and provides a wealth of information about the film and the challenges Wise faced while making it. Of keen interest is the material involving the reaction to the film.  A new commentary track by film and music historians Nick Redman, Steven Smith, William Stromberg and John Morgan is focused primarily on composer Bernard Herrmann\'s involvement with the film, and it\'s an utterly fascinating track to listen to.  Herrmann\'s personality and approaches to scoring are explored, and any music fan will find this a very informative track.  Finally, the music score is presented in an all new 5.1 DTS Master Audio track, and sounds absolutely stellar.

In "The World of the Theremin", we get three choices: Hosted by musician Peter Pringle, "The Mysterious, Melodious Theremin" (5.5-minutes, HD) is a look at the history and function of the creepy-sounding electronic instrument that was made famous through its use in SciFi B-movies, even though it was created back in 1918.  "Main Title Live Performance by Peter Pringle" (2.5-minutes, HD) is a new performance of the themerin part (performed by Pringle), with the original instrumental accompaniment.  Thirdly, "Interactive Theremin: Create Your Own Score" is a quick and dirty way to sequence some gritty-sounding theremin notes into a scene in the film; but there isn\'t any graceful sliding between the notes, so it\'s not as cool as I had hoped it would be.

Sadly missing from the Blu-ray is the 70-minute documentary "Making the Earth Stand Still", but in its place, we seem to get a pared down  new featurette, "The Making of The Day the Earth Stood Still" (24-minutes, HD) which covers most of the main points about the film\'s message and production, but without the truly in-depth analysis the feature-length documentary had provided.  "Decoding \'Klaatu Barada Nikto\': Science Fiction as Metaphor" (16-minutes, HD) looks at the film in a historical context, with a focus on its messages of peace and disarmament.  "A Brief History of Flying Saucers" (34-minutes, HD) is an interesting documentary about the various encounters that people have had witnessing flying saucers, with archival footage, photos, and interviews, and a particular concentration on the Roswell incident.

Two featurettes look at the writers.  "The Astounding Harry Bates" (11-minutes, HD) is a profile on the author of the original story that the film\'s screenplay was based on, and "Edmund North: The Man Who Made the Earth Stand Still" (15-minutes, HD), which looks at the screenwriter who adapted the story. So determined was North to push for disarmament and warn people about the dangers of nuclear obliteration that in 1982 he made a documentary short PSA, "Race to Oblivion" (27-minutes, SD) which involved Burt Lancaster interviewing a survivor of the Hiroshima bomb, and a rather creepy song.

"Farewell to the Master (96-minutes) is a new reading in three parts of the original Harry Bates short story that the film was based on, narrated by voice actor Jamieson K. Price. "Fox Movietonews (1951)" (6.5-minutes, SD) is an archival piece that discusses a few items of the day (including the Ms. America pageant, General MacArthur and a new defense pact between the USA and Japan), as well as a brief mention about The Day the Earth Stood Still winning a science-fiction award.

There are seven "Galleries" on the disc.  "Interactive Pressbook" contains clippings of news items from the time of the film\'s release, "Advertising Gallery" has a lot of different posters (both foreign and domestic), "Behind-the-Scenes Gallery" has a bunch of candid shots, "Portrait Gallery" looks at the different actors, "Production Gallery" looks at the shooting process, "Spaceship Construction Blueprints" shows close-ups of the design plans, and finally "Shooting Script" lets you read the screenplay through a massive series of stills.

Wrapping up the extras, the teaser trailer (1 minute, SD) and theatrical trailer (2-minutes, SD) are included, as well as a trailer for the new 2008 remake of The Day the Earth Stood Still (2-minutes, HD) starring Keanu Reeves. (When you first put the Blu-ray into the player, you\'ll get a 7-minute extended preview of the film, as well.) Missing from the Blu-ray release which was on the older DVD release is a "Restoration Comparison" that showed the cleanup work that went into restoring The Day the Earth Stood Still back in 2002.  Finally,  "Gort Command! Interactive Game" lets you use your remote control\'s arrow keys to aim Gort\'s crosshairs on enemy targets.  Seems weird, since the "enemies" are all those public servants (firefighters, soldiers, policemen) that you would want to protect you!

The Day the Earth Stood Still is a serious message movie wrapped in a science-fiction shell.  With an exceptional score, great visual transfer, healthy slew of new extras and a pretty inexpensive price tag, this Blu-ray is well worth picking up. Just be sure to hold on to your old "Studio Classics" release for the missing featurettes.