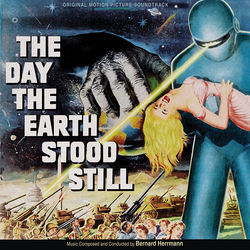 The Day the Earth Stood Still

The Day the Earth Stood Still stands among Bernard Herrmann's most memorable achievements (in a career filled with them), and may possibly be his most innovative. At the fore, of course, is the use of the theremin (two, actually, one "high" and one "low," played by Samuel Hoffmann and Paul Shure). But that's not all that makes this score unique. In contrast to Herrmann's famous strings-only score for Hitchcock's Psycho, The Day the Earth Stood Still utilizes none—unless one counts the meticulous punctuations of harp, piano (two of them) and cinema's first use of the electric violin (performed by Felix Slatkin). Also absent are woodwinds, a choice that allows the score's evocative brass clusters to take center stage. The sound field is further dominated by the versatile resonances of the Wurlitzer pipe organ, offset by percussion instruments sitting in the extreme high and low ends of the frequency spectrum.

The Day the Earth Stood Still was previously available on Arista over twenty years ago. That edition is obviously long out of print. A complete version of the score was available briefly as an extra in the laserdisc release of the film, and that version was also included in the multi-disc and very expensive Bernard Herrmann at Fox box on Varese Sarabande—that release sold out instantly. Given the limited availability of the box, we felt it was very important to make this classic score available again for the fans who missed out on it. It has been given a new, fresh mastering and sounds absolutely incredible in that wonderful early Fox stereo sound that was as unique as the Herrmann score. New liner notes by Mike Matessino.