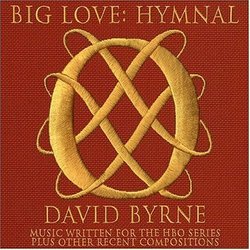 I'll have to admit right off: David Byrne can do no wrong. There may have been some stutter-steps in his career, but generally, this chameleonic artist has found a way to stay fresh and relevant for over 30 years. For starters, his first foray into major motion picture scoring landed him, along with Ryuchi Sakamoto, an Academy Award for The Last Emperor. Since then he's launched a solo career after his stint with the Talking Heads and has delved into multimedia projects, writing and record producing. His latest effort, apart from his other recent work with the legendary Brian Eno ("Everything That Happens Will Happen Today") and "playing a building" in New York, is on the small screen for HBO's Big Love. While it may not come as much of a surprise for fans of David Byrne that he gravitated to this project, but the results are extremely satisfying even if you aren't a fan of the artist or cable series.

The series follows the lives of a family from a fundamentalist polygamous sect, the United Effort Brotherhood, which is "inspired" somewhat by the Fundamentalist Church of Jesus Christ of Latter Day Saints (FLDS). The family is headed by Bill Hendrickson (Bill Paxton) who's wives are portrayed by Jeanne Tripplehorn, Chloë Sevigny and Ginnifer Goodwin as Barb Henrickson, Nicolette Grant, and Margene Heffman respectively. During the past two seasons the show's covered the hectic lives of family, attempting to live their lifestyle incognito among the greater community while dealing with the political and financial intrigue among the church and their businesses. It's a surprisingly involved and well-told set of stories given then dearth of well-scripted series and characters seen on the ADD addled programming choices of the major broadcast networks. Much like it's "sister" series on HBO such as Entourage, Deadwood and The Wire, viewers will find that the weight of good television now lies in the land of paid cable series. With that prestige, the supporting crews that produce those shows are equally top notch. That of course brings us back to David Bryne's work for the show.

While not the sole scribe for the music of the series (Mark Mothersbaugh of Devo was tapped for the first season, and former Suzanne Vega keyboardist, Anton Sanko has been tapped for season three), his work for this past season was the most traditionalist in sound and style that you may expect for such a show, without overdoing it. Titling the album "Hymnal," obviously draws it's roots in the theological aspect of how music plays an important role in every religion in the world, and conversely, how it adds an undertone to film and television works. Drawing inspiration from his solo "art" works, "The Forest," "The Catherine Wheel," and "The Knee Plays" as well as stylistically from his last album "Grown Backwards," Byrne pairs down his instrumentation to the barest essentials, grounding the melody, counter-melodies and harmonies. On "Hymnal", this results in the pairing of a small string section (which Byrne has been using off-and on for the past decade) with piano and brass ("Exquisite Whiteness," "The Angel Moroni"). It's a heightened "Americana" in a way, slightly anachronistic in the orchestration, but with the free flow of a modern aesthetic and sense of rhythm. It's quite bizarre if you're not accustomed to it.

As it plays in the show, aside from the fact it stands quite well on it's own, is somewhat comical to tie traditional "arrangements" of hymn-like melodies to a show steeped in the moral controversies on how to view their interpretation of religion in a modern society. Anybody familiar with Byrne's underscore and songs with the Talking Heads for True Stories can see how he plays off this juxtaposition of subverting seriousness but supporting the story at the same time ("The Mouth of Malachi," "Deep Water" and a cover of Elvis' "Blue Hawaii"). Granted, the album still has a number of serious and other very experimental tracks ("A Building in the Air") which keep the melange of styles interesting. The music would be also happily support some of David Lynch's work (ala Twin Peaks) in it's sparse oddity at times as well ("A House on Sand," "A Hill in Ontario County"), displaying Byrne's chameleon-like ability to write just about anything, probably influenced heavily from his collaborations and work on his alterna-label, Luaka Bop.

I really kind of dig this album for all of it's "virtues," let alone being a fan of Mr. Byrne's for many years. The show is odd, and so, not surprisingly so, is the music... but in the way that makes you feel satisfied with that self-appreciating smile on your face. If you want to hear one of the most inventive musicians in the world; an artist in the physical medium, writer and, well even theologian (visit his website for more, much more), pick up this CD. It's a nice compendium if you're cognizant of his past and present works, and an interesting "needle drop" on what's coming out of that head owned by David Byrne for the uninitiated.