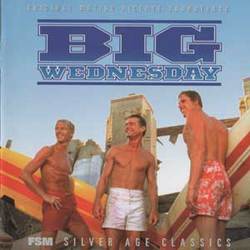 In my wildest film score imagination, I would not have imagined a film about surfers to have such a rich, diverse orchestral score, but then Big Wednesday was no ordinary film - and its composer eventually went to stellar musical heights in Conan The Barbarian, Lonesome Dove and Starship Troopers. Both writer/director John Milius and composer Basil Poledouris grew up in Southern California, and surfing was more than just a way to pass the days. To these two, the sensations, the skills and the styles in the sport epitomized their philosophy and outlook on life. They both poured this passion and insight into Big Wednesday and it certainly is a treat for fans of their work, as collaborators and individually.

This was Poledouris's first orchestral score but there is so much assuredness present and much of his trademark style, melodically and harmonically, is present. It combines grand, sweeping gestures, representing the swelling waves, the passing of time and a major surfing competition, with more intimate colors utilizing acoustic and Hawaiian guitar to paint scenes of personal growth, weddings and many partings. More diversity is added with a bold march ("Preparation March"), source music ("La Golondrina", "Green Onions"), quaint vocal folk tunes ("Crumple Car", "Only Good Times") and also a mystical raga-inspired track ("Cosmic Indifference"). Even the film's energetic trailer music ("Big Waves"), culled from the montage material, is happily included. As with all Poledouris scores, such marvelous melodies abound in each and every cue.

Reverential brass begin "The South Swell/Main Title/Three Friends Theme" hopefully, mirroring the characters anticipation of a glorious day atop the waves, which then builds to triumph throughout the rest of the first track and the presentation of the first of the score's two main themes, the second being for the three friends, presented on acoustic guitar. The "Passing of the Years" theme receives several treatments throughout, always with sonorous strings and woodwinds, reminding one of Poledouris's eventual work on The Blue Lagoon. There is some surprising darker tonalities heard in "Bear's Story" and "Matt Morning and Ominosity", utilizing low end piano and woodwinds and muted brass.

There is also a good deal of exciting material throughout the score, starting unassumingly in "Matt Surfs" and "Jack's Back Part 2", then becoming more strident and soaring in "The Challenge/Big Wednesday Montage", "Matt's Rite of Passage" and also the alternate "Big Wednesday Montage" track. These sections certainly give a good indication of the massive orchestral soundscapes which Poledouris has become a master at from score to score, especially in Conan, Flesh & Blood and Farewell To The King. Combined with further gorgeous, understated and reflective tracks such as "Aloha, Jack" and "Bear's Wedding", these diverse musical elements all add up to marvelous listen, a well rounded album and a worthy archive of the entire Big Wednesday experience, for surfers and non-surfers alike, and certainly for fans of Basil Poledouris's unique talent.