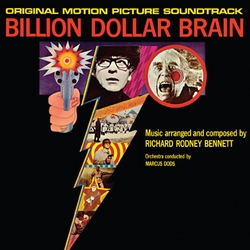 Kritzerland is proud to offer a limited edition soundtrack release—two great scores on one great CD!

Billion Dollar Brain is a very entertaining yarn with a terrific cast and an absolutely stellar score by Richard Rodney Bennett. Mr. Bennett had already done the brilliant score for John Schlesinger's film of Far From The Madding Crowd (Oscar nomination), and would follow this film with a series of memorable scores for many films. His score for Billion Dollar Brain is filled with wonderful energy and great themes (none more so than the electric main title theme), and is one of the highlights in a career filled with them.

The Final Option has some exciting and taut action set pieces, main titles by Bond guy Maurice Binder (as does Billion Dollar Brain), and a rousing and wonderful score by Roy Budd. Budd was a terrific composer and wrote great scores for Fear is the Key, The Wild Geese and others. His score for The Final Option is grand fun and a must for Budd fans and Budd neophytes.

Previously available only as part of a very expensive limited edition box set called The MGM Soundtrack Treasury that sold out quickly, we are pleased to make these two in-demand scores available as a stand-alone release for all who missed out on the box set or may not have even known about it. This release has been newly remastered.