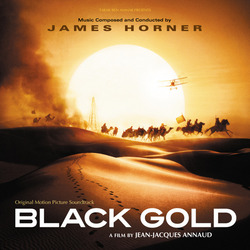 The victorious Nesib, Emir of Hobeika, lays down his peace terms to his rival Amar, Sultan of Salmaah. The two men agree that neither can lay claim to the area of no man's land between them called The Yellow Belt. In return, Nesib will adopt Amar's two boys Saleeh and Auda as a guarantee that neither man can invade the other.

Twelve years later, Saleeh and Auda have grown into young men. Saleeh, the warrior, itches to escape his gilded cage and return to his father's land. Auda cares only for books and the pursuit of knowledge. One day, their adopted father Nesib is visited by an American from Texas. He tells the Emir that his land is blessed with oil and promises him riches beyond his wildest imagination. Nesib imagines a realm of infinite possibility, a kingdom with roads, schools and hospitals all paid for by the black gold beneath the barren sand. There is only one problem. The precious oil is located in the Yellow Belt.

James Horner is one of the most celebrated modern film composers. Having created the music for dozens of the most memorable and successful films of the past two decades, Horner was honored with two Academy Awards and two Golden Globes for James Cameron's Titanic.

In addition, he has earned Academy Award nominations for his Original Scores for Avatar, House of Sand and Fog, A Beautiful Mind, Braveheart, Apollo 13, Field of Dreams and Aliens, and for the Original Song "Somewhere Out There" from An American Tail.

Horner's sweeping dramatic score for Black Gold is an integral element to the film which will transport audiences into the heart of the Arabian desert.