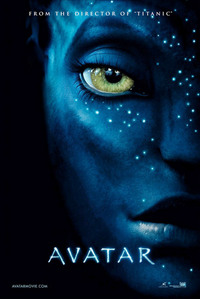 A military man in a far-off land forges a relationship with the natives, falls in love with one of them, sympathizes with them, and ends up leading an uprising against his own people who seek to exploit the natural resources of the land.  No, I'm not talking about Pocahontas or Dances with Wolves. I'm talking about Avatar, the first feature film in 13 years from Oscar-winning director James Cameron, following 1997's Titanic.  Set in 2154, humans have colonized space, and have discovered a precious mineral ("unobtanium") on the lush moon of Pandora, which orbits a gas giant.  Unfortunately, the native Na'vi - a ten-foot tall blue-skinned sentient humanoid species indigenous to Pandora - aren't too thrilled with the mining operation, and have put up resistance.  So the RDA Corporation (heading up the mining effort) have a private security firm (Sec-Ops) contracted by ex-military types to keep everyone safe.  In parallel, Dr. Grace Augustine (Sigourney Weaver) has created the "Avatar Program" to help facilitate good relations between the humans and the Na'vi.  The program lets humans create a neural link to human-alien hybrids based on their DNA that can survive in the harsh atmosphere of the planet - like remote driving a body, if you will.

After the death of his twin brother, wheelchair-bound ex-marine Jake Sully (Sam Worthington) is tapped to replace him in the Avatar Program, since Jake's DNA is identical to his brother's, and he's therefore a match for the Human-Na'vi hybrid that was already created for his brother.  After getting separated from the scientific team on an outing, Jake ends up meetin Neytiri (Zoe Saldana), a female Na'vi who believes that the mother goddess Eywa might sense something special in Jake - so she brings him back to Hometree, the giant tree where her clan resides.  There, her mother -the clan's spiritual leader - takes an interest in Jake, and tasks Neytiri with teaching Jake the ways of the Na'vi.   Sensing an opportunity, Sec-Ops head Quaritch (Stephen Lang) tells Jake to get some intel on the Na'vi and Hometree - since the largest unobtanium deposit turns out to be right beneath it.  As Jake bonds with the Na'vi, his loyalties start to blur, and soon he finds himself in the middle of a conflict between humans and aliens, and he needs to pick sides.

The biggest problem with Avatar is the script. While James Cameron has done amazing work creating a completely realistic looking world in Pandora, and the visual detail is extraordinary, the cookie-cutter characters detract heavily from making this a masterpiece.  Jake Sully is John Dunbar, and he turns to the Na'vi's side pretty fast, and even his Braveheart-styled motivational speech just prior to the film's jawdropping battle climax seems flat, unoriginal,  and has a "been there done that" quality.  From the pigeonholing of Quarich as a "kill the savages" meathead, to the caricature of the Na'vi as a one-with-nature people who proclaim to be equals with the other animals - while at the same time mentally bonding with them to exert control over them, Cameron's characters are hardly "deep".

Once you get beyond the flat characters and predictable rehashed plot, Avatar becomes one of the coolest movies in years.  If there's one thing Cameron has been able to do exceptionally well, it's to come up with a vision and execute it - and all that attention to detail pays off in spades.  He's also a master of choreography - the battle sequences are so well blocked out and edited, allowing us to enjoy the massive amounts of eye-candy.  The film supposedly cost nearly half-a-billion dollars, and it's nice to know that all of it is on the screen.  Musically, James Horner's score doesn't seem to break any new ground, and while fans with sharp ears will hear bits of some of his previous works (especially his 'four note danger motif'), it still provides just the right amount of emotional boosting that the film doesn't get from the script.  In the end, Avatar is a great experience - especially if seen in 3D - and while the story and characters might seem a bit flat and familiar, it's still absolutely worth checking out.

The first Blu-ray release of Avatar comes as a two-disc set, one being the bare-bones Blu-ray, and the other being a standard definition DVD of the feature.  As there are no extras whatsoever to be found on the disc, this is effectively a "superbit" release of the film, utilizing every bit of disc space to provide the maximum bitrate and quality possible.  Presented in a 16x9 frame that is taller than the scope aspect ratio of the non-IMAX theatrical release, Avatar takes advantage of the increased image size, letting the world of Pandora come to life in full vivid clarity.  Colors are - as expected - predominantly blue, and as most of the film was either CGI or shot digitally, there is no grain whatsoever to be found.  In some respects, that clarity makes the film look a bit more artificial at times, but the rendering and animation is so well done that it almost doesn't matter.  This film is one of the purest forms of eye candy, and the presentation is near perfection.  Even deeply saturated colors that I would have expect to cause banding on the screen don't have issues at all.  And as good as the image is, the audio is even better.

Presented primarily in a DTS-HD Master Audio 5.1 track (what, no 7.1?), Avatar maximizes usage of your home theater.  Dialogue is crystal clear, and the sound effects totally immerse you in the world of Pandora.  The action sequences benefit greatly from this immersion, but even quiet dialogue-heavy scenes have a great sense of spatial placement.  Sounds come from every speaker, and you truly feel like you're right there.  Horner's music similarly comes at you from all angles, helping push the right emotional buttons.  Audio is also available as a Dolby Digital 2.0 English track, Spanish, French and Portuguese Dolby Digital 5.1 tracks, and finally an English Descriptive Audio Service track (which I always find to be entertaining to hear as a narrated version of the film).  Obviously, the best quality is the DTS-HD MA track.

As mentioned previously, there are no extras whatsoever to be found on this release - just a menu which lets you set up your audio and subtitle choices, and jump to different scenes in the film (or your own bookmarks).  It shouldn't come as a surprise that it's already been announced that a more full-featured "special edition" of Avatar will be coming later this fall, reportedly including a longer cut of the film, a feature-length documentary on the making-of process, and much more.

When one looks beyond the rehashed plot, cheesy dialogue and clichéd moments, Avatar is still one of those movies that just seems to work. It creates a fully tangible world that is a treat to behold, and with a stellar presentation on Blu-ray, it's now something everyone can experience at home.  While the eventual special edition will provide a lot more in the way of extras, for those who need to get their Pandora fix right now, this is definitely a must-own film with plenty of demo-worthy moments to show off your home theater.