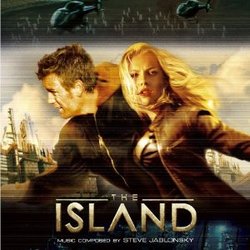 Michael Bay's science fiction action film, The Island, capped off a busy time of the year for composer Steve Jablonsky, who began work on the project after scoring Bay's Amityville Horror remake and finishing the season for the television series Desperate Housewives. Like the film, Jablonsky's score surpasses Bay's last project, Bad Boys II, but does not quite match the music from Bay's projects in the late 1990's, namely The Rock and Armageddon. However, Jablonsky's score works well in the film to provide a percussive backdrop to the action and some musical setting to Bay's shots of the American southwest.

A new style of music has been developing, of late, among Hans Zimmer's team of composers, which is a moving eighth note motif that tends to open the score, laying out the tempo before the rest of the instrumentation is laid over it. This style can be heard in Zimmer's King Arthur and Batman Begins>, as well as in James Dooley's The Mars Underground. Each of these scores use this motif in the strings, and vary it throughout the film for different scenes. For The Island, Jablonsky uses a similar motif, but gives it to the acoustic guitar. The motif is used as an introduction to the main theme, which is then performed as a sub-theme underneath. This is how the album opens with "The Island Awaits You", which is the main title that plays over Bay's camera soaring over the Pacific coastline.

Much of the score for The Island is percussive electronic action music and, given the volume of Bay's action, works fine, since thematic development in such scenes would be lost in the fray. Comparisons with previous Bay films cannot be helped: The Island lacks the patriotic sense that was captured to different degrees in The Rock, Armageddon, and Pearl Harbor, and therefore lacks the strong themes. What The Island does have to its credit is a new sound for a Bay film, for that same reason. The main theme for The Island is subtle and usually accompanied by either the guitar motif or a repeated drum beat, both of which add a sense of motion to the music ("Sector 6").

The few romantic moments in the film ("You Have A Special Purpose In Life" and "This Tongue Thing's Amazing") are treated with a quieter version of the theme, the latter, though, still contains the eighth note motif. However, the standout cue on the album is the finale track, "My name Is Lincoln," which brings together all the elements of the score as Bay's camera pans about the "Island". But Jablonsky varies the drum beat, the guitar pattern, and even the brass theme and throws in a wordless choir as the little moments of theme that we heard throughout the film coalesce into a nearly four-minute suite that alone is worth the price of the album. Unfortunately, the disc closes with a rock song called "Blow" by the Prom Kings which has nothing to do with the film and should be skipped. Regardless, The Island is a solid score by Steve Jablonsky, who's other solo works outside the horror genre, namely Steamboy, have been impressive. I look forward to his next projects.