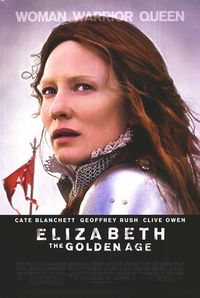 It\'s not often that an Oscar-winning drama gets a sequel, and retains most of the original crew and cast. I don\'t think Lord of the Rings counts, since it was based on a book and so two sequels were inevitable. But 1998\'s Elizabeth ended when Elizabeth (Cate Blanchett) was crowned - so there was plenty of story material from her reign left untapped, some of which is covered in this year\'s sequel, Elizabeth: The Golden Age. There are three concurrent plots going on in the movie: Elizabeth\'s search for a suitor, so as to produce an heir; Spain\'s King Philip II\'s determination to conquer England as part of his Inquisition; Mary, Queen of Scots\' plot to have Elizabeth assassinated and take over the throne (in league with Phillip). As before, Elizabeth is advised by Francis Walshingham (Geoffrey Rush), and he recommends she find a husband. She has eyes for adventurer Walter Raleigh, who has eyes for Elizabeth\'s lady-in-waiting Bess (Abbie Cornish).

With three different storylines to follow, things don\'t get confusing -but they never feel fully explored. The film runs less than two hours, and we\'re bouncing between dark and ominous scenes of scheming assassins planning to kill Elizabeth and replace her with Mary, and scenes of Elizabeth with Francis as she falls for him - but occasionally throwing us back to Spain where Phillip is planning his big war. It\'s all very pretty looking (great costumes, production design and cinematograpy), but the biggest problem with the film is that when it comes to the climax of the film - the battle between the Spanish armada and the English fleet - it feels like an afterthought, and is concluded within nearly 5 minutes. Compounding the problem, Craig Armstrong\'s score comes off as overwrought and too big, and when combined with the (nearly laughable) imagery of Elizabeth overlooking the burning armada intercut with Phillip staring at a candle as the flame is extinguished, it\'s just too over the top to be taken seriously.

By the time the film is over, you feel like you\'ve been given a glimpse of what could have been a solid historical drama, but in the end was a rushed story that tried to cover too many plotlines without giving any of them their due. That makes Elizabeth: The Golden Age a technically well made, but disappointing sequel to a really good film.