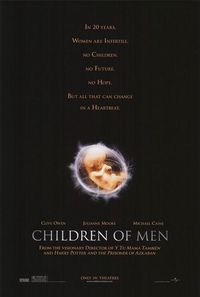 Director Alfonso Cuarón has had a very interesting career to date. He\'s done children\'s movies (A Little Princess), sexually explicit dramas (Y Tu Mama Tambien), and a major franchise film (Harry Potter and the Prisoner of Azkaban) among others. Azkaban was easily the best of the Potter films to date, and I really enjoyed Cuaron\'s storytelling style and visual sensibilities. His latest film, Children of Men has a similar look, but the film couldn\'t be any different.

Based on the novel by P.D. James, Children of Men takes place 20 years from now, in a dystopian future where humans are unable to reproduce, and the world has fallen into disarray. England is a police state where they\'re constantly rounding up the refugees (affectionately called \"fugees\") trying to escape their own ravaged countries and putting them in elaborate camps. \"The Fishes\" - an underground group trying to fight against the inhumane treatment of these refugees - riddle the country with attacks to try to spread attention to their cause. The movie focuses on Theo (Clive Owen), a man who is pulled into the underground world of the Fishes - led by his ex-wife - to help Kee (a miraculously pregnant West African refugee) get to the coast, so she can be taken by a secret hospital ship to The Human Project, based in the Azores.

As Theo travels on this difficult journey to bring Kee to safety, we meet a variety of characters, including Theo\'s ex-political cartoonist friend Jasper (Michael Caine) who grows illegal pot, Theo\'s ex-wife and Fish-member Julian (Julianne Moore), Miriam the former midwife (Pam Ferris) and Luke (Chiwetel Ejiofor), a Fish member with questionable motives. Eventually Theo gets Kee to a refugee camp where they can get to the coast, at which point the military has caught up to everyone resulting in a big confrontation.

Cuarón does everything exceptionally well. The film is well shot, well paced, interesting, well staged, and exciting at times too. The problem with it is, what\'s the point? I mean, it\'s a rather well done film - with some exceptionally great sequences - but I just don\'t see how it matters. Theo is the protagonist - we see the entire film through his eyes - but he doesn\'t actually do anything. He\'s a victim of circumstance, for the most part, and everything he does is for Kee - but even when the end of the film comes, you are left with a feeling of \"um, okay, now what?\"