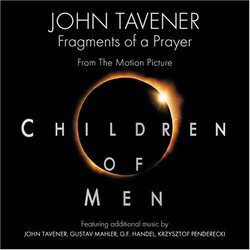 Children of Men: Fragments of a Prayer

The album producer for Children of Men was sincere enough not to label it "original motion picture soundtrack". Indeed, Children of Men contains no original score cues per se; what it is instead is an effective if somewhat drawn-out compilation of modern classical pieces used in the motion picture. Its interest in the film music community is therefore more limited: those who have enjoyed the soundtracks to Stanley Kubrick\'s films might take a particular liking to Children of Men, while those expecting a traditional film music setting will find themselves track skipping.

Sir John Tavener\'s concert hall work forms the crux of the album. Tavener is an English composer whose style has been shaped over the years by the mysticism gathered from the studies of numerous religions. He was a member of the Russian Orthodox Church for many years before leaving it to explore other spiritual avenues, all of which have influenced his music since then. He might be recognized by some as the author of "Song for Athene" which was performed at Lady Diana\'s funeral; his vocal-centric piece "Eternity\'s Sunrise", which appears on Children of Men, was later written and dedicated to her. The album opens with back-to-back Tavener: "Fragments of a Prayer" and "Eternity\'s Sunrise". This half-hour segment serves to establish the tone and mood of Children of Men: spiritual, reverential, tranquil, and beatific. It is not plainchant, nor is it opera; rather, it is written for a female mezzo-soprano and makes full use of her range. The progressions are melodious and diatonic (no chromaticism here), the notes are held to full effect, and a quiet orchestral ensemble occasionally colors brief passages.

The following twenty minutes are spent as a short revue of classical music, starting with Handel\'s Baroque "War, He Sung, is Toil and Trouble", an aria from his opera Alexander\'s Feast which pulls us back in time with the harpsichord; continuing with Mahler\'s tormented "Nun Will Die Sonn\' So Hell Aufgeh\'n" for male singer, woodwinds, brass, and strings; and finishing with one of Penderecki\'s most recognized works, the highly dissonant and atonal "Threnody for the Victims of Hiroshima", where a veritable array of string instruments scream their anguish in tremolo before attacking left and right over a shifting bed of col legnos... and that\'s just the beginning.

We then return to John Tavener\'s work for the last twenty minutes of the album, first with "Song of the Angel", a duet for mezzo-soprano and violin that oozes sacredness. "The Lamb (for string orchestra)" gives us vocal respite but the style is the same: quiet and melodic progressions firmly rooted in the opening key. "Mother and Child" is a return to the first segment\'s longing and reverential mode, this time for full choir. Finally, "Mother of God, Here I Stand (for string orchestra)" is perhaps my favorite of the John Tavener selections. Its second half breaks free of the calm ebbings of his sacred style by introducing dramatic, ascending chords for the string ensemble, leaving the piano range behind and going into forte, the contrabasses asserting themselves, the whole ensemble coalescing into powerful stabbing motions before slowing down and ending on a satisfying cadence.

Let\'s not kid ourselves: The album for Children of Men is a John Tavener concert with a twenty-minute interlude. As such, it almost succeeds in kidding ourselves that we are listening to an honest-to-God score: the style and textures throughout are highly cohesive and the changes from one track to the next are as peaceful and non-jarring as possible. I do prefer a little more dissonance in my classical music, but Tavener\'s music was a nice change of pace from the Penderecki and the Ligeti. The album does stretch itself out thin by the end and might work better as a meditative medium than a shuffle selection between Hans Zimmer and Danny Elfman. While the vocal segments are simplistic, they are beautiful and beatific and fans of Kubrick\'s classical selections might take an interest in this little trip off the beaten path.