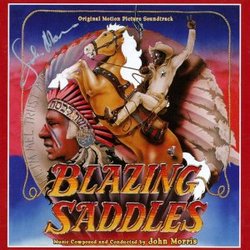 Excuse us while we whip this out... The first-ever official, studio-licensed release, in any format, of the full music soundtrack to the classic 1974 Warner Bros. western/comedy Blazing Saddles, directed and co-written by Mel Brooks.

Bonus tracks include special instrumental versions of all the songs. Exclusive liner notes take you behind the film and its music with comments from Director/Co-Writer/Songwriter Mel Brooks and Composer John Morris. This is a limited edition of 3000 Units.