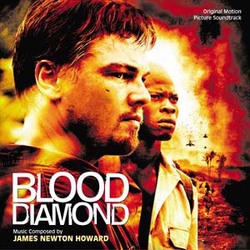 After 2005's The Interpreter, Blood Diamond is James Newton Howard's second recent score for a film that involves Africa, and the music reflects that characteristic in both. There are, of course, similarities between the two scores: the instrumentation and use of vocals give certain cues the ethnic African sound, both scores rely heavily on percussion and rhythm, and when the plots for these films take over from the setting and characters, the music follows suit by providing background pacing and tension. However, while The Interpreter took place mostly in New York in and around the United Nations, Blood Diamond remains in Africa for all but one scene, which allows the score to maintain its ethnic focus.

Also like The Interpreter, this score does not revolve around a theme the way many scores do. Blood Diamond is not thematic; instead, it is melodic, rhythmic, and ethnic, while tailored to the nuances of each scene. The melody is easily discerned from the rhythmic parts: it is in 6/8 time and consists of chords over which is layered a staccato string pattern that is kind of a backwards waltz: the emphasis (higher note) falls on the 3 and 6 count instead of the 1. Fans of Newton Howard's score for Lady in the Water from earlier this year may hear a similarity in the duality of the chords and moving line; it is also reminiscent of "The Egg Travels" from Dinosaur (also in 6/8). This melody first appears in "Crossing the Bridge" with only the chords which, though the notes are long, keeps the sense of motion. In "Archer & Solomon Hike," the waltz rhythm comes in first and is then joined by the chords. This melody - both the chords and rhythm—is also at the end of "Goodbyes," and in "I Can Carry You" and "London." The score uses this melody a lot, and I could probably get away with calling it a theme, but I think this score is doing something different. Themes in a score generally relate to the subject matter of the film—Jack Sparrow in Pirates of the Caribbean, the Fellowship or Gondor or the Ring in The Lord of the Rings, and Narnia or the Children in The Chronicles of Narnia: The Lion, the Witch, and the Wardrobe—but in Blood Diamond, this is the only consistently recurrent melody and isn't subject related.

Rhythmically, James Newton Howard's score becomes purely functional in the action scenes, using percussion for pacing and suspense, with fast strings and strong brass woven through ("Village Attack," "Fall of Freetown," "Diamond Mine Bombed"). But the percussion rhythms are also used ethnically and are the venue for the score to tailor itself scene by scene. Shots of an African village early in the film are accompanied by a light, musical percussion instrument that sounds like a Marimba (similar to the beginning of "Archer Sells Diamond"); later, a similar shot of a village takes on the heavy, tense percussion of the action scenes when the second village is under attack. Newton Howard doesn't have an ethnic Africa theme and then a warzone theme; the change in tone is accomplished purely by using different percussion instrumentation (performed by The Senegalese Drum Ensemble).

Throughout this score, there are many beautiful, classic Newton Howard cues. The vocals in "Blood Diamond Titles" (sung by Youssou N'Dour) are reminiscent of the Atolago hymn used in The Interpreter. "Solomon Finds Family" is a quiet, chord-based track with a solo cello (Maya Beiser) that rises above the chords toward the end that achieves an emotional tone while staying miles away from melodrama. Overall, this is a subtle score and if you're hoping for a track like "The Great Eatlon" from Lady in the Water or even "Tarawa" from Snow Falling on Cedars, there isn't one quite as powerful, but listen to "Your Mother Loves You" and "London"—I don't think you'll be disappointed.

This score works very well for the film. There are a few action scenes during which the music is all but lost beneath the sounds of the scene, but the score is of course meant to be the background. On album, it's a very nice listen and balances well between serenity and suspense. I was excited to see there were 24 tracks for just over an hour of music, but unfortunately, the last three tracks are songs that, though used in the movie and end credits, I think the album could have done without; these take up a fifth of the album's length. Oh well. The 48-minutes of score are well worth the price of the CD.