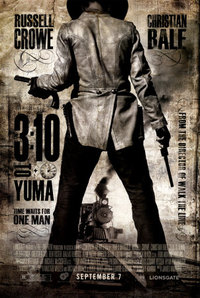 Director James Mangold\'s latest film, 3:10 to Yuma is a remake of an Elmore Leonard short story about cattle rancher Dan Evans (Christian Bale) who decides to take the responsibility upon himself to transport recently captured outlaw Ben Wade (Russell Crowe) to the train to take him to Yuma Prison. Wade\'s gang, led by the sadistic and ruthless Charlie Prince (Ben Foster) will seemingly stop at nothing to get Wade back, but along the way, Evans and Wade form a strange relationship borne out of mutual respect for doing what\'s right - even if one of them is a hardened criminal.

Evans, who lost his leg in the Civil War, is desperate for $200 to keep his home from being taken over by the bank, which stands to make more money off of it when the railroad comes through town. His teenage son William (Logan Lerman) sees him as weak and cowardly, so when the opportunity to make the money by transporting Wade arises, Evans jumps at the chance - and forbids William from joining them. Along with Doc Potter (Alan Tudyk), Byron McElroy (Peter Fonda), Tucker (Kevin Durand) and railroad representative Grayson Butterfield (Dallas Roberts), the group travels across the high desert landscape trying to avoid Apaches and get to the train before Prince and the rest of Wade\'s gang catches up to them.

Mangold, who last directed the excellent Walk the Line does an exceptional job at evoking the feeling of the old West through the use of sound and image. The cinematography and production design are quite good, and feel genuine. Bale and Crowe deliver minimalist and understated performances, which work towards the nature of their characters. As the film progresses, the more Wade tries to get Evans to let him go, the more stubborn Evans gets about the the principle of the matter. All of this is rendered moot at the end of the film, though, so it\'s a bit of a head scratcher why someone would go through all this trouble when there really wasn\'t any point to it in the end - except for the character journey, I suppose. But in the end (and this isn\'t really ruining anything), Wade is still a bad guy, and while it might seem like he was trying to do some good, it really ended up being a somewhat cruel thing to do. (I\'m not going to say what it was - can\'t ruin everything!)

The music by Marco Beltrami is quite good - it\'s a solid score, which adds nicely to the action, underscores the emotion, and has a driving rhythm. The climactic shootout has some very heroic Morricone-inspired trumpet work, and it\'s a very solid soundtrack album. I can\'t really complain too much about the film overall - it\'s technically very well done, and everything about it is very professional and enjoyable to look at (and listen to). I just feel that the morality of the characters is a bit of a headscratcher, and as such it makes it hard to empathize with them - either you\'re cheering for a bad guy, or a misguided coward.