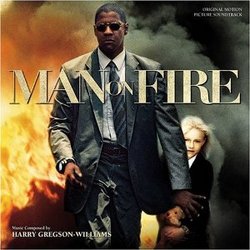 Performed by
The Seattle Session Orchestra

With his 2001 score to Tony Scott's Spy Game, Harry Gregson-Williams proved he could work very well on his own. Not only did Spy Game show his adeptness at blending electronics with orchestral elements, but it also exhibited a variety of ethnic music as the film involved numerous locations. Spy Game helped re-establish Gregson-Williams as a big name in film music and he has only gotten better since. Each score he has done has been a new style in a new genre: from the ambient electronics of Phone Booth to the percussive action of The Rundown, the swashbuckling powerhouse of Sinbad: Legend of the Seven Seas to the celtic-inspired drama of Veronica Guerin and more.

Gregson-Williams' latest score reunites him with Tony Scott's portrayal of Americans in foreign places, this time Mexico City in Man on Fire. This film is one of the best action/thrillers since... well, Spy Game, and the music compliments the film extremely well. While stylistically similar to Spy Game, the score to Man on Fire lacks the thematic subtlety, but makes up for it in ethnic consistency. Gregson-Williams pulls together some Media Ventures favorites such as vocalist Lisa Gerrard (Gladiator) and guitarist Heitor Pereira, but throws in some new sounds as well.

The album (currently available on iTunes and supposedly to be released on CD by Varese Sarabande on June 8 although all mention of the album has vanished from their website) opens with the chilling sound of an electric violin performed by Hugh Marsh. This instrumentation has been used widely since Hans Zimmer's Black Hawk Down, and Gregson-Williams uses it widely throughout this score. The music then surges into a electronic remix of a salsa beat (homage to Marc Anthony's role in the film?), which is something I've never heard before and it accompanies Tony Scott's spasmodic opening credits nicely. The film also features some non-score songs, quite a few by Nine Inch Nails and Linda Ronstadt. There are also two points in the score (the end of the "Main Title" and "Gonzalez") that feature some rock-beat vocals that seem out of place, but they generally work with the style of the movie.

The music in Man on Fire is almost like a continuation of the Spy Game score in terms of style. Gregson-Williams uses his trademark electronics and string suspensions throughout. There is also a piano theme (like Spy Game) which is Pita's theme, heard best in "Smiling" and then on the acoustic guitar in "Pita's Room". The theme reflects Pita's innocence and sounds a bit like Joe Hisaishi's theme from Princess Mononoke. The piano is also heard a few other times with quiet solos, once in "The Rooftop" playing a brief statement of one of the Spy Game themes a little over halfway through the track. The movie is almost two separate stories, one of Creasy and Pita's bonding and the other a tale of Creasy's revenge, and this is reflected on the album as well. The highlight of the first part is the gorgeous orchestral cue "You Are Her Father" which is also the only presence of any brass in the music and can be heard behind the strings.

Man on Fire is a tale of revenge, and the score shows this very well at times. Both Spy Game and Man on Fire have electronic elements, but while the former was very rhythmic, elements of Gregson-Williams' latest effort are chaotic explosions of electronic beats - and it's great! The first is in the last 30 seconds of "Kidnapping". In "Motorcade", there is a quiet build up with the guitar and electric violin, which creates a very foreboding feeling before the electronics take over at a point in the film where Creasy is at his most remorseless. This occurs again at a similar scene in "Sanchez Family". The electronics seem to be used to reflect both Creasy's anger and pain.

There are some interesting parts of this score, but it would be no more than typical thriller score if it were not for the last few tracks. A third of the album's 29 track length is in the last 3 tracks. The final cue, "The End", coming in at just under ten minutes, is a wonderful finale for the film. It begins with the electric violin, followed by a restatement of the piano theme and the first presence of Lisa Gerrard's vocals. One criticism of this score is that it sounded like Gladiator, and this would be due to parts of her vocals, which do resemble the final scenes of Gladiator. However, they work incredibly well and take the music in a new direction. The very end of the track breaks into some light percussion behind Gerrard's strengthening vocals in a very uplifting cue before the album closes with her voice alone.

While this score is exactly what I was expecting (and hoping for!) in terms of style, it comes as a complete surprise as well. It is in no way a rescoring of Spy Game, but takes Gregson-Williams' talents to yet a new level. The music in Man on Fire was vital to the film as there was such raw emotion behind Denzel Washington's troubled character. From the loving innocence of Pita, who teaches Creasy that it is alright to live again, to the pure rage and anger in some of the latter tracks' electronics, to the final uplifting end track, Man on Fire is a quite unique and very powerful addition to Gregson-Williams' filmography.

Editor's Note: This review was written based on the iTunes release of the soundtrack, prior to the album release. Now the CD has finally come out, and there are a few differences. "Kidnapping", "Talking About War", "Motorcade", "Jordan Kalfus" and "I'm So Sorry" have been dropped. In their place, we get a few source songs from the film that help flesh out the world in which it takes place. "Una Palabra" and "Oye Como Va" firmly set the film in Mexico City. A new track at the end, "Man on Fire Remix" features a shorter version and punchier version of "The End". Completists are advised to get the album, then download the extra tracks on iTunes.