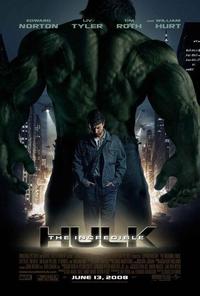 It\'s rare these days that a franchise gets a chance to make a clean start, especially so soon after the last failed attempt. With Marvel Studios\' The Incredible Hulk, they not only wash away the bad taste of Ang Lee\'s 2003 portrayal of Bruce Banner as a tortured soul (Hulk), but bring us a rather kickin-superhero movie that has a solid (albeit simplistic) storyline, relatively fleshed-out characters, decent emotional ups-and-downs, and some rollicking action scenes.

The film starts out five years after Bruce Banner (Ed Norton) was accidentally infected with gamma radiation, turning him into the Hulk and injuring his girlfriend, Dr. Betty Ross (Liv Tyler), and finds Banner living in hiding in Brazil, where he works as a day laborer at a soft-drink factory and trying to keep his anger under control. When he accidentally contaminates a drink bottle, the military team that has been searching for him, led by General \"Thunderbolt\" Ross (William Hurt), rushes to capture him. Helping on the mission is British special ops expert Emil Blonsky (Tim Roth). The attempt to capture Banner fails, but unleashes the Hulk - and now it\'s a race against time as Banner tries to find a solution to keep his inner Hulk under control (or eliminate it altogether), and the military tries to capture Banner to exploit the super-soldier lurking within him.

Directed by Louis Leterrier (the Transporter series), the film is a popcorn movie that succeeds on pretty much every level. It\'s entertaining, it\'s never boring, it\'s well acted, the dialog is smart, and the action is fun to watch. Sure the climax consists of two computer-animated beasts battling it out, but it\'s so well done that it\'s easy to forgive. Norton infuses the character of Banner with a humanity that feels genuine; you truly believe that he is conflicted about the power within him. Tim Roth does a nice job as the power-hungry Blonsky, and William Hurt\'s cigar-chomping General looks like a combination of Dale Dye and Paul Newman. The screenplay was written by Zak Penn, but supposedly Ed Norton had a hand in writing a lot of the dramatic moments, including a lot of stuff which had been cut from the film (Leterrier has stated his intention to include over 70 minutes of deleted footage on the Blu-ray release of the film). Still, it\'s well done and while the love story aspect seems a bit short, but what is there feels heartfelt and you can believe the relationship between Betty and Bruce.

There are a few winks-and-nods to the Marvel Universe, starting with the requisite cameo by Hulk creator Stan Lee, and even TV\'s Hulk, Lou Ferrigno, has a welcome cameo. Also making a small appearance is Joe Harnell\'s classic \"Lonely Man Theme\" from the television series, excerpted in Craig Armstrong\'s bombastic, thematic and energy-filled score. The visual effects are quite good, a marked step up from the 2003 attempt at a Hulk film, and Rhythm & Hues should be commended for their work - the scene of Hulk in the rain is incredibly photorealistic.

Almost on par with Iron Man, The Incredible Hulk was an enjoyable summer movie, one that easily washes away the memories of 2003\'s Hulk. (Though to be fair, there some aspects of that film that I did enjoy.) This movie took me by surprise and with a welcome cameo at the end of the film, Marvel seems to be positioning themselves to do an Avengers movie that will combine many franchises. 2008 may very well be remembered as the year of the comic book, and it will be in no small part to the success of The Incredible Hulk.