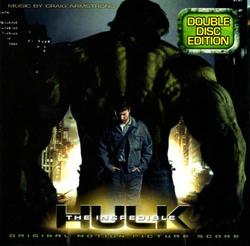 If the release of Craig Armstrong\'s The Incredible Hulk is any indication, the future of soundtrack releases is promising.

But let me back up before we get to that point.

I have to admit that I was leery of the newest screen incarnation of The Hulk. Even with its faults (most notably a mash-up of an ending), I immensely enjoyed Ang Lee\'s earlier version. Danny Elfman\'s score for The Hulk, though a last-minute replacement and awkward in some places, had one of the composer\'s most malleable themes, one that provided endless variation and nuance and was a nice action-oriented counterpoint to Lee\'s more introspective take on the character. I read the reports that The Incredible Hulk was re-edited to be more action oriented to avoid the \"disaster\" of the last film with disgust and wondered what Craig Armstrong would do with the material given him.

I\'ve long admired Armstrong, especially since his collaborations with Baz Lurhmann, a director who has gleefully refused to be confined to one genre throughout his career, much less in one film. Armstrong\'s career mirrors that of Lurhmann\'s as he has bounced between working with pop groups, writing operas and other concert music, and scoring films as diverse as Ray, Must Love Dogs, and World Trade Center. His scores are intelligent and strike out in new directions combining electronics, chorus, and string orchestra to create an instantly recognizable sound world. With this background, I can only assume Armstrong was encouraged to write a more traditional action movie by the film\'s director Louis Leterrier and the film\'s producers as he has crafted one of the weaker scores of a strong career that carries more action tropes than you might expect from a composer with Armstrong\'s resume.

One thing that Armstrong does right in the score is to give musical personalities both to Bruce Banner and to his alter ego, the Hulk. Bruce\'s theme first appears in \"Rocinha Favela,\" the release\'s third cue. Over an innocuous percussion pattern, high strings travel primarily down the tonic scale, generally outlining the octave through repetition and jumps. With its downward motion, the theme has a melancholy air and reappears throughout the score in cues that contain Bruce\'s name. The Hulk\'s theme, introduced in the first two cues, \"The Arctic\" and \"Main Titles\" is related to Bruce\'s theme but breaks it down to the most basic interval – the octave. Over pulsing electronics, the basses glissando up and down between two Cs, the acknowledged beginning of our musical scale. Using the fundamental interval on the Western world\'s fundamental pitch complements the vision of The Hulk as elemental, a force of nature that cannot be controlled. The relationship between these two themes is masterful scoring and promises much from the music to come.

Unfortunately, Armstrong does not deliver on his strong opening. The music quickly descends into common action tropes that could underscore any contemporary action movie. The two exceptions to this path stand out as the strongest cues on the recording. Halfway through the release, we reach \"Hulk Theme.\" Armstrong starts with the now-familiar Hulk octave glissandos, but after a few iterations of the interval, he alters it by moving it to outline first a 9th, then a 7th, and then back to an octave. Violins take the pattern up over the basses, moving at a faster note value until electronics come in, shocking you as your ears had become so accustomed to string-only textures. This altered motive is then inverted, displaced, and generally taken through many permutations as layers are added on top of layers. The result is a thrilling cue that hints at a deeper score lurking underneath the one we were given.

The second instance is the cue \"Bruce Goes Home.\" Here Armstrong opens with Joe Harnell\'s \"Lonely Man Theme\" from the television version of \"The Incredible Hulk\" from the early 1980s. The theme opens the cue on piano in a lovely arrangement before returning to the album\'s typical sound.

But while the score is not particularly notable, the manner in which it was released is. Apparently the director felt the score so strong that he pushed to have it released in total, without the usual cuts that characterize soundtrack releases. Partnering with Amazon.com, Marvel agreed to sell The Incredible Hulk as a two-disc CDR pressed on demand. The sound quality of the CDRs is quite good and the privilege of hearing every note Armstrong composed for the movie is a welcome one. Could this move presage the future of score releases? I hope so, if only so we can hear how the composer fully envisioned the score.