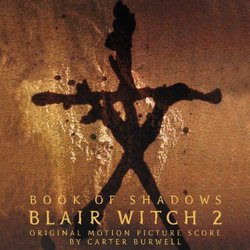 The Blair Witch Project was an interesting phenomenon. It cost nearly nothing to make, and grossed over $250 million worldwide. It spawned countless satires and parodies and, of course, a sequel. Book of Shadows: Blair Witch 2 is nothing like the first film. Here the premise is that a bunch of people who saw the first film decide to go into the woods and investigate the legends - but end up smoking pot and drinking beer - then not remembering what happened that night. Some people were killed, and now suddenly everything seems to be not quite what it seems.

The film suffered from a lack of structure, and there were plot holes big enough to drive a bus carrying the Burkittesville Seven through. In the end, it was a rather unsatisfying film that happened to have a few fluke moments of interesting stuff. One thing that survived the film, though, is Carter Burwell's interesting percussive score - which never stands out in the film, but helps add to the background ambiance and tension.

Burwell recorded the sounds of rocks striking and scraping against each other, water splashes, wind, and other natural sounds. He then layered these together with rhythmic patterns and electronic textures. The result is a score that serves almost as enhanced sound design. There is certainly a primitive tribal element to the score. "Rock Water Wind" begins the album, and it's a great seven minute long percussive track that just builds layer upon layer to result in some very interesting patterns. "Funny Farm" has a great bass groove and "Still In The Hills" even feels like an action cue, with plenty of underlying tension.

"The Truth?" is the cue that finishes the film, as everything comes to a head. It starts off with a quiet percussive backing and small synth effects. But as it goes on, it builds more and more and gets more frenetic until the point where it, like the film, just ends. With a running time of about 40-minutes, this rather interesting score is not really a necessity in your soundtrack collection. But if you wanted to hear a rather unusual score by Carter Burwell, it's certainly worth a listen. The film, on the other hand, is best delayed until it's on home video.