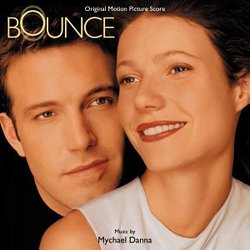 The following is a rather short review of a very short album. Mychael Danna's score to Bounce, aside from featuring packaging almost indistinguishable from that of the "song" album, features little to set it apart from various other releases this year. That is not to say that it is bad music - on the contrary, it is quite pleasant and always listenable. Simply, it is to say that it all sounds somehow familiar, and when it's finished, one is inclined to wonder if they've really just spent almost half an hour with the score. It's a grand piece to have on while typing, or waiting for sleep to consume you; it's not likely to distract you from your business, as might, say, The Sweet Hereafter or 8MM. It's light, with a string/wind orchestra playing to an electronic ensemble of beats, guitars, and keyboards.

Strangely enough, I felt almost as though I was listening to a W.G. Snuffy Walden "thirtysomething" score at times during this album. I'm pretty sure that's a compliment, but it's not to say that the music is very "Danna-esque." It comes and it goes without offending anyone, but Danna's work in the past has tended to be far bolder. A pretty enough score, but if you haven't got some of Danna's more "eccentric" work—particularly The Sweet Hereafter and The Ice Storm - I'd recommend those first.