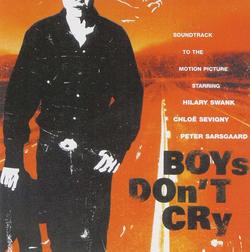 If you haven't seen Boys Don't Cry, go now. Director Kimberly Peirce handles the emotional, visual and sonic with a deft hand. She is most definitely a 'musical' director. So, when I saw her name listed as one of the soundtrack's producer's, I knew I would not be disappointed. This is a solid compilation of songs from various artists, some you may have heard of and some you most likely will not be familiar with.

Listening to the CD, I kept asking myself one question: is Steve Earle "country"? No, Steve Earle doesn't appear on the disc, but during my first listening I kept hearing his style. He's got that southern, country/rock thing going on in songs like Someday and Southern Kisses. But Steve Earle country isn't the 'look at my belly button while you listen to my shlock music' country of Shania Twain or the 'I'll show you my full lips so you don't notice how thin my music is' country of Faith Hill and their ilk. It's the sort of country sensibility that comes from somewhere way down deep. It's written and sung from the heart… it just comes out a little bit country. Or a lot. It doesn't matter. It's just good music.

Most of the highlights on this compilation fall into this category, with a few notable exceptions. One of my favorite tracks on the album kicks it off, "The Bluest Eyes In Texas". The version on the CD doesn't feature Chloe Sevigny doing her karaoke version! That worked in the film beautifully, but Nina Persson and Nathan Larson do an excellent job with this Van Stephenson / Dave Robbins / Tim Dubois -penned tune. The tone is set right out of the gate and the rest of the CD follows in that vein.

Other 'country' standouts on the disc include "Silver Wings" by the Knitters, "Tuesday's Gone" by Lynyrd Skynyrd and the Blue Moon-esque "A New Shade Of Blue" by The Bobby Fuller Four.

The Smithereens' "She's Got A Way" (not a cover of Billy Joel's tune) is fantastic. There's something so organic about this (New Jersey) band. Raw, visceral, rockin'.

The Isley Brothers' "Who's That Lady" and Timmy Thomas' "Why Can't We Live Together" as well as The Charlatans' "Codine Blues" fill out the offering with a bit of funk/blues and lend nice counterpoint to the 'country'.

This CD isn't for everyone, but if your music heartfelt and a bit raw, you won't be sorry.