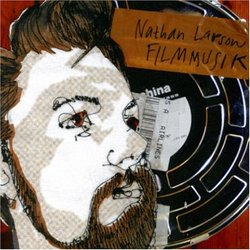 Nathan Larson seems like quite the character. One visit to his website reveals a casualness and a down-to-earthiness unexpected from a film composer who was awarded the Gras Savoye Award at the 2004 Cannes Festival, among other prizes and awards. His recent release, Nathan Larson: Filmmusik, showcases his ability to emulate simple urban soundscapes filled with an eerie quietness and powerlessness.

For Prozac Nation, he limits his arsenal to four instruments: an electric guitar, a piano, a violin, and an ethereal Crumar analog synthesizer. In doing so, he crafts a dreamy mindscape that barely escapes the droning and aimless wandering of underscore through a consistant use of motifs and good knowledge of harmonies. The piece "Something Like Love" ties it all together, throwing the motifs in a common melting pot and letting them bloom in a depressing and aching musical release.

For Boys Don't Cry, Larson's first solo feature, the score is more aggressive, using rock band arrangements based on the song "Bluest Eyes in Texas". Quieter scenes laid the foundation for Prozac Nation, with a solo reverberated electric guitar cleanly picking away at pseudo-motifs with vague synthesized patches echoing in the background.

The rest of the album achieves a similar mood of quiet desperation through various instrumental choices. Lilja 4-Ever puts the emphasis on muted, elegiac string work; Tigerland recalls the Far East with wooden percussion and the erhu; and The Woodsman is no different than the pieces from Prozac Nation, a nylon-stringed guitar replacing the electric one.

The music rarely gets lost in its indie strive for originality, but "Operator" from Phone Booth makes us glad most of Larson's score was ultimately rejected as not sympathetic nor suspenseful enough. The album may not be suited for fans of strongly melodic material or symphony aficionados; yet, what could've been little more than lo-fi, background muzak is actually well executed and shows a distinct gift for simplicity and urban minimalism. Filmmusik doesn't explode with the wrath of a thousand horns; rather, it stays under the welcome mat, gently and unobtrusively underscoring our own urbane lives.