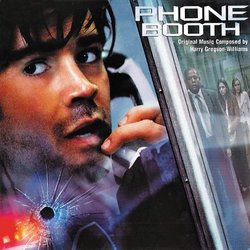 There\'s quite a bit to talk about with this score before even mentioning the music. The release of Phone Booth was postponed indefinitely from a November release due to the sniper attacks in Washington D.C. in fall 2002, though the score still hit the shelves in November. The movie follows Colin Farrell who gets trapped in a phone booth in NYC by a sniper somewhere above, played amazingly by Kiefer Sutherland. Farrell\'s acting is top notch as he gets ever more stressed as the movie plays out. When the film finally came out in early April, it fortunately did not slip into oblivion as other postponed movies have, such as Collateral Damage and Trapped. If you missed it in the theaters, it is definitely one to check out on DVD.

Joel Schumacher\'s direction was moving toward the technology age, contrasting the use of cell phones with the last phone booth in NYC, which Farrell of course gets trapped in the day before it is scheduled to be knocked down. The electronics in the score are not harsh, as some of the orchestrations in Spy Game tended to be, but quiet and tense; the score will filter into the background unless you\'re paying very close attention. I had been expecting another Spy Game type score with a wide range of orchestrations within the electronics and numerous themes. Therefore, upon first listen, I was disappointed at the apparent themelessness. But there are themes. They are more rhythmic rather than orchestral. The rhythm for NYC appears first in "NYPD" and "Times Square" and continues in "Last Booth in NYC" and "Is He Coming Out". "Last Booth in NYC" is actually from one of the opening scenes, though it appears as track 9 on the album. The tracks are not in order, but it mixes up some of the orchestrations so the tracks do not sound too similar.

The other theme in the score is a quiet piano motif that is sometimes passed along to the strings, as heard in "Confession" and "Center of Attention". It is a soft echoing theme that is, again, more rhythmic than thematic, but works. The final two tracks on the CD are the most interesting. Reflecting the tension of the film, "Just Say the Word" repeats the electronic rhythm theme, then slows it down significantly as if winding down, before cutting out and coming in again a tempo. "It Could Be Anyone" is another subdued track of soft electronics with the faint echoing theme returning again in the piano and fading out.

Superb Records\' packaging is simple, yet like the score, works. A few photos of the cast line the notes, but do not give anything away from the movie. The guitar work - of which little can be heard - is credited to Peter Distefano (from Porno for Pyros) who, in 2001, released an album with Harry Gregson-Williams under the cover name Rambient, titled "So Many Worlds". The score to Phone Booth is not Gregson-William\'s most enjoyable score, but it is an interesting listen, if you like electronic scores and rhythms. I would suggest buying it if you noticed it in the movie or if you\'re a die hard fan of Gregson-Williams\' work. Many in the film music world often forget that a film composer\'s first responsibility is to write music to fit the film, and Gregson-Williams did just that.