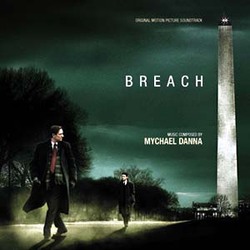 Coming hot off the heels of the quirky Little Miss Sunshine and the stunning Nativity Story, Mychael Danna\'s Breach sounds very conservative and restrained by comparison. It is a nocturne for piano and strings akin to Danna\'s work on Capote (minus the Midwestern elements) and to the sullen piano pieces adorning his score to Breach director Billy Ray\'s Shattered Glass. It is once again solid work from the Canadian composer if nowhere near as impressive to the ear as Water or The Nativity Story. The plot, as with Shattered Glass, is a dramatization of real-life events: it is the story of FBI agent Eric O\'Neill (Ryan Phillipe) and the cat-and-mouse game he is called on to play with his boss, Robert Hanssen (Chris Cooper), a double agent who is selling intelligence secrets to the Soviet Union. One might expect a suspenseful score, but Danna\'s cues are mostly quiet and introspective, creating an album that does not overflow with originality but which is a solid listen nonetheless.

"A Full Day" is a good representation of the suspenseful style Danna devised for the few scenes that required it. It is rarely dark but more curious, focusing on quick figures for the lower strings with incidental melodies for the piano and glockenspiel and woodwinds lending occasional colors. "Double or Nothing" ups the tension quotient with mild dissonance in rising violin lines, but the well-used percussion and synthesizers opening the cue keep the music afloat over a sea of gloom and modernize the action.

The majority of the music, however, is firmly personal. "Dangerous World", the album opener, quietly ebbs and flows to the sound of a gentle harp and muted chords on the piano. It is distinctly reminiscent of Shattered Glass: indeed, the two scores could be seen as close cousins, although Breach is less diverse in sound and a bit more "adult" in its orchestrations. Hanssen\'s theme can be clearly heard on solo piano at the beginning of "Morning Mass", soon to be harmonized by the celli. It recalls both Stephen Glass\' melody and the sullen piano theme from Shattered Glass and is very effective, hesitant at first and at once sad and reassuring.

The drama reaches its peak in "The Arrest", which opens with the same slow, three-note harp arpeggio as "Dangerous World", and it leads the listener to a much louder chord progression for the large string ensemble based on the muted piano chords heard at the beginning of the opening cue. A piano reprises Hanssen\'s theme in the ultimate track, "The Why Doesn\'t Matter", with soft accompaniment by the bassoon, the oboe, and the clarinet.

Breach does not offer the exotic and lush soundscapes of The Nativity Story; or the painfully beautiful Indian flavor of Water; or the quirky and touching originality of Little Miss Sunshine. Those expecting to hear that Mychael Danna will be disappointed. The story here does not warrant this approach. The Mychael Danna we hear in Breach is the composer whose subtle sensibilities can be heard in the quieter moments of Shattered Glass and the minimalism of Capote. Breach is a quiet character piece, the chamber orchestra being mixed in a way that no instrument stands out as overly loud or distracting. Its themes are effective and the album is a relaxing whole punctuated by brief moments of modern suspense. It is the kind of music one listens to while finding out dark secrets in a filing cabinet after hours, the Washington monument outside brightly lit against a dark green sky.