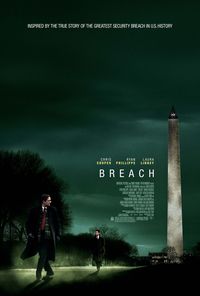 Breachis the new drama based on the true story of FBI Agent Robert Hanssen, who spied for the Soviet Union, and how he was caught. Written and directed by Billy Ray (Shattered Glass), the film is not a thriller - as the trailers might have you thinking - but rather, it\'s a tense drama. Eric O\'Neill (Ryan Phillipe) is a young FBI operative who wants to become an Agent. When he\'s assigned to be Hanssen\'s aide at a new IT department of the FBI, and told to watch him for online sexual deviancy, he feels like he\'s being sidelined to a small internal affairs case that has no real importance. As he and Hanssen start to bond over religion, O\'Neill starts to question his assignment - at which point, he\'s brought into the fold and told the truth about Hanssen and his spying for the USSR. Things shift as a cat-and-mouse game unfolds, as the FBI tries to get the evidence it needs to catch Hanssen in the act, and O\'Neill tries to keep his cover - and his marriage - intact.

This was a solid film. The problem with any \"based on a true story\" film is, depending on the subject matter, you know how it ends up. We all knew the Titanic was going to sink, but it was still an enjoyable and tense film. Similarly, we know Hanssen gets caught - but it\'s the journey, not the result, that makes this film a very well done one. The actors all do a solid job, but it\'s Chris Cooper\'s portrayal of Hanssen that people will remember, and hopefully they won\'t forget by the time awards season rolls around again.

I had attended the scoring session for the music, composed by Mychael Danna, and it was very well used in the film. Never overbearing, but providing the right amount of emotional nudging to lean you in the right direction. I look forward to the album.

Breach is worth checking out, if you\'re in the mood for a taut drama with solid acting and interesting characters. If you want mindless action, Ghost Rider is playing near you.