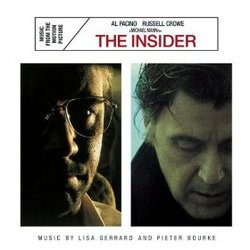 In his films, Michael Mann has always known exactly how to use music. Whether it's the synth heavy atmospheric music in Manhunter (with "In-A-Gadda-Da-Vida" providing an interesting underscore for the climax), Trevor Jones' and Randy Edelman's scores to Last of the Mohicans, or Eliott Goldenthal's dark atmospheric score to Heat. For his latest film, The Insider, Mann commissioned Lisa Gerrard (formerly of Dead Can Dance) and Pieter Bourke to write the score.

The film (as well as the album) starts off with the very tense percussive track "Tempest", which has a very Middle Eastern quality (complete with soloist), which is not surprising as the film opens as Lowell Bergman (Al Pacino), a "60 Minutes" producer, is being taken to see the leader of Hezbollah to secure an interview for Mike Wallace. There are a few cues comprised of tense atmosphere - solo vocalist and strings - as we feel the pain and anguish of Jeffrey Wigand (Russell Crowe) as he tries to blow the whistle on the tobacco industry as his life crumbles around him. Other parts of the score are very percussive in tone, but most of it is full of strings and emotion, such as in "Faith", which uses a church bell to great effect.

At one moment in the film, where Wigand needs to make a decision, which if he goes ahead with it, could land him in jail, Mann chose to use "Iguazu" by guitarist Gustavo Santaolalla. This acoustic guitar solo is simply amazing, and it stuck out as I watched the film as something to listen for on the album. There is one thing about this album that they don't advertise - you have to read the fine print. Graeme Revell wrote three of the cues on the album. While these cues fit rather seamlessly into the film, they stick out a bit on the CD - because they are put separate after the Gerrard and Bourke cues, and don't carry the same themes. But a very exiting moment in the film (and a key pivotal point) uses Revell's music ("Palladino Montage") - a short cue that has a great tense bass line that builds up with percussion and synth.

Also included on the album are two songs by Jan Garbarek and Massive Attack, which worked well in the film, and are a nice addition to this album. If you haven't seen The Insider, do so. It was a great film with some great acting. Once you've seen the film, you'll realize that the music played a very large role, and I would hope that you add this album to your CD collection.