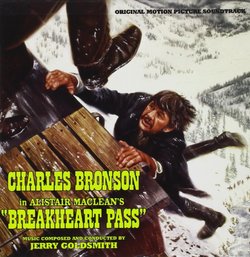 Much is made of Jerry Goldsmith\'s track record with directors of note, such as Franklin Shaffner, Paul Verhoeven and Joe Dante, but there were several other consistent relationships with lesser known directors for lesser known films and all received stellar scores from Goldsmith. Breakheart Pass was the fourth project on which he worked with director Tom Gries, after a prior Western, 100 Rifles (1969), another Charles Bronson vehicle, Breakout (1975), and the Emmy award television mini-series, QB VII, which in particular featured a wealth of thematic material for its broad canvas. In Breakheart Pass, a train ferrying medical supplies and a U.S. Army unit becomes an incubator for danger, especially after prisoner John Deakin (Bronson) decides to investigate a mysterious murder.

The "Main Title" gallops out of the gate like a horse and rider in hot pursuit, propelled by acoustic and bass guitar, but driven by a winning, confident main theme presented mainly on brass and including a warm bridge section. The style and structure is similar to his main theme for Winter Kill, a tele-film scored the previous year. "Free Ride / Hot Stove" opens in a typically powerful Goldsmith manner, with a pumping low brass and string ostinato (an imitative gesture towards the film\'s locomotive transport), xylophone accents and the main theme heralded on trumpet. There is some melancholic material developed through low woodwinds and mid-range strings, alternating with suspenseful settings of the main theme on bass flute, col legno strings and a brief rising 4-note motif on clarinet. The suspense continues in "Medical Supplies", the rising motif and main theme both appearing in muted brass, along with very low range, grunting woodwinds, similar to what was heard in The Omen.

Acoustic guitar and flutes amble through "The Trestle", the pace beginning to advance and soon exploding in the next track, "On The Move / Runaway". Here the trombones hammer into the rising 4-note motif as the basses kick start a cue which quickly gathers fierce momentum, just as the unhinged train car in the film rockets down the tracks. "No Word Yet" features some neat Logan\'s Run-type electronic pulses while sparse suspense returns in "Night Watch / Help Yourself". A brief, warm setting of the theme on oboe and acoustic guitar highlights "Who Are You?" before the album reaches its lengthiest track, "The Casket / Box Car Fight". Tension here slowly mounts through low woodwinds and piano, bells, tremolo strings and the rising motif on muted horns until a flurry of rhythmic action takes charge, during which the main theme heard is in fragments.

A great, driving version of the theme, including its bridge for the first time since the "Main Title", highlights "Here They Come", all leading into "Raiding Party", a marvelously energetic set piece including an indelible trombone ostinato. The score closes with "Reunited / End Credits" as oboe and trumpet respectively present heartfelt variations of the main theme against guitar, before the "Main Title" is reprised in full. I actually recall reading about the unfortunate unavailability of this score for years, except through illegal channels, where I first heard it, and a Japanese LP pressing. This is a welcome, legitimate yet limited release of the score and fans of Goldsmith\'s work in the action and Western genres would do well to pick it up.