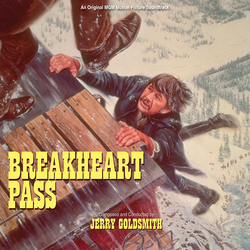 Jerry Goldsmith's score for Breakheart Pass is as good as it gets. Goldsmith had worked with director Gries on 100 Rifles and the mini-series QB VII so they knew each other's sensibilities well.

From the first guitar strums of the main title, Goldsmith's score does what all great scores do—involves you instantly and sets you up for what's to come. His theme is addictive and propulsive—it literally makes you sit up and take notice. From there he captures not only the rhythm of the train itself (which is a character in the film), but tender moments, moments of high suspense, character moments, and, of course, the adventure sequences, which no one did better than Goldsmith.

Breakheart Pass was previously released on CD by La La Land Records. This release is essentially that album as mastered by James Nelson, with some notable exceptions: In the film, there is a wonderful action sequence towards the end on top of the train. Goldsmith apparently didn't score it, but Gries and his music editor thought music would help there and so two cues were edited together for that sequence ("Runaway" and "Box Car Fight") and we've recreated that edit for this CD and put it in the proper sequence—it plays beautifully with it.

On the previous CD there were two bonus tracks—some guitar strums called "Four Styles" and a trumpet cavalry call. We have left off the cavalry call since it has nothing to do with Jerry Goldsmith or his score. The four guitar strums are not really germane to anything but we've kept them.

But the biggest difference is the inclusion of a cue that was missing from the previous release. The hunt for that cue took weeks—pulling every tape MGM had and frustratingly not finding it anywhere. Finally, we decided to pull the D/M/E tracks and that's where we got it from—it's a great cue (it's actually the second half of the cue called "Here They Come") and we're thrilled to finally have it available. We include it in two forms—in the score program as a part two of "Here They Come." The "Here They Come" album cue was missing almost fifteen seconds of its electronics at the beginning, so as a bonus we give you the entire cue as it plays in the film, complete from the music track of the D/M/E.