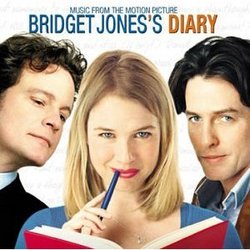 So I was just handed the Bridget Jones's Diary soundtrack to review.  Having enjoyed the film, I was delighted to have the opportunity to review the album.  What's on it?  Songs. Fifteen of them to be exact. What's more is that there is a range of styles represented here that isn't often found on collections. The timbres of women's voices and men's voices alike. Imagine that. Thoughtful lyrics that you actually want to listen to. Organic sounds (read: "acoustic instruments played by real fingers – and hearts and souls") - none of that synth/loop/sample stuff. I guess the ultimate statement about this soundtrack comes from the fact that I put it in the player about two weeks ago and it's still in there. And I'm still listening to it.

The CD kicks off with a tune by Shelby Lynne you may have heard on the radio called "Killin' Kind". Shelby Lynne, the decade-in-the-making overnight success story, actually has a page in the liner notes dedicated to her new "I am Shelby Lynne" album. (You may recall her powerful, intimate duet with Sheryl Crow at the Grammys.) If you like country-rock this is a great tune. If not, there's plenty more to follow. Speaking of Sheryl Crow, she has the second track on the soundtrack, Kiss That Girl. It's a solid song – good even. But I'm a fan. Again, if you like her style you'll like the tune. If you don't like the style, move onto track three.

Rosey performs the next song, "Love". It's got a great groove to it with some cool samples. If (so many of the) loop-based producers really worked on their songwriting chops this is the kind of tune they'd arrive at. Verse, chorus, decent bridge. Wow! What a nice change. My hat goes off to both Rosey for her writing and to Darryl Swann for the writing and production.

Robbie Williams comes in with two tunes, "Have You Met Miss Jones?" (the Rodgers/Hart ditty) and his own composition, "Not Of This Earth". We on this side of the pond have yet to really catch on to Robbie Williams, with the exception of his song "Angels". Here's a hot tip for you: Mr. Williams is huge in the UK and Europe. So huge, in fact, that people often refer to him simply as Robbie. There's a reason for this. He's extremely talented and just as versatile. The two songs here demonstrate his ability to move from pop to swing, making both sound equally contemporary and intimate.

A couple of covers on the soundtrack really stand out. Not only for their familiarity but also for the way the filmmakers used them to accentuate the moment / emotion onscreen. The Eric Carmen song "All By Myself", covered here by Jamie O'Neal and "It's Raining Men", the Weather Girls hit, covered here by ex-Spice Girl Geri Halliwell, work well on the disc. If you've seen the film you know what I'm talking about. The two sequences set against these tunes were memorable and charming. It's a different school of editing than "cut-to-the-beat" but, obviously, just as effective. Don't we all recall a sequence in a film where the words in the soundtrack or source tune accentuated what the characters were doing or feeling onscreen? Think about it. I bet you'll come up with a dozen in as many seconds. I won't even go into the other stand out cover by Dina Carroll of Van Morrison's "Someone Like You". As I am the biggest Van fan west of the Mississippi I'll let you make your own decision. Suffice it to say that there's a Van tune on the disc. Those of us who are members of The Religion know what that means: Gotta have it.  There's a Motown / soul thru-line on the collection as well. Diana Ross, Marvin Gaye, Chaka Khan and Gabrielle fill out the colors on the disc quite nicely.

What can I say? I'm still listening to the Bridget Jones's Diary soundtrack. I'm listening to it now. I'll probably listen to it tomorrow – that is, if I can keep my fiancé from stealing it from me. A side note: She's a dance music fan and she loves this soundtrack. Well, if a Van Morrison fan (lunatic) falls for the sounds on this CD as well as a hard-core dance/techno fan (geek - just kidding), it can't be that bad.