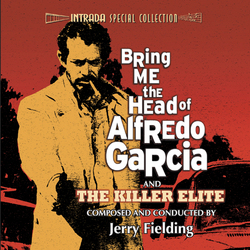 Bring Me the Head of Alfredo Garcia / The Killer Elite

Review: Bring Me The Head of Alfredo Garcia / The Killer Elite

Among the many director/composer relationships, the one between Sam Peckinpah and Jerry Fielding is one of the most underrated and overlooked.  Through their five-film collaboration, their relationship grew more cantankerous and strained until it finally ended in bitterness.  Fielding's work, however, was no less vital.  His work on The Wild Bunch and Straw Dogs added immensely to both films, giving a noble and solemn voice to the violent proceedings.  Both movies featured scores, which worked great within the films and were a pleasure to listen to on their own.  While those two films had stand-out scores, the music he composed for Bring Me the Head of Alfredo Garcia and The Killer Elite is the type which works great in the movie but does not stand so well on its own.

The brooding score for Bring Me the Head is sometimes reminiscent of the tone Fielding created in Straw Dogs.  There is nothing exhilarating or joyous in Bennie's desperate quest for a better life and redemption.  His mercenary journey leads him into the very depths of his own personal hell.  Fielding's minimalist soundscapes envelop Bennie (Warren Oates doing a great take on Peckinpah) as he sinks lower and lower.  Because there are no big Peckinpah set pieces as in Wild Bunch or Straw Dogs, there are few notable cues in Fielding's score.  In fact the only stand out cues are source cues that Fielding himself composed.  In these three cues ("Killer's Rhapsody", "On the Road", and "El Jefe") you can almost feel Fielding trying to escape the dark confines of Peckinpah's downbeat story.  While those three source cues are in mono, the rest of the complete score (along with omitted cues) is presented in stereo.

The Killer Elite is not one of Peckinpah's finer efforts.  Nonetheless Fielding infused the tale of CIA double-crossing with a dark jazz-tinged score that would have fit just as well into an Eastwood film.  But for an action film, it's a score that doesn't go anywhere.  It lays there in wait most of the time and occasionally rears its head to strike.  Of the 10 cues only two are notable for just this reason - "Sailing, Sailing" and "End Titles".  The rest of it is not very distinctive or memorable.

Intrada has done a great job in mastering these two scores and wisely putting them on one CD.  Aside from Fielding and Peckinpah fans, it's difficult to recommend these scores to anyone else.  While they both work fine in their respective films, especially Bring Me the Head, these scores do not offer a great deal of repeated listening pleasure.  For completists only.