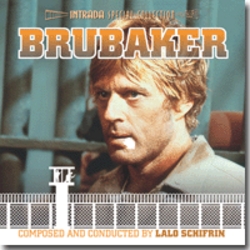 Released in 1980, Brubaker was in some ways a revolutionary work in terms of its content and approach to the subject.  It took on the tough subject of prison abuse and reform and approached the material in a mature, thoughtful manner.  The film follows the journey of a dedicated prison warden who enters the prison not as a warden, but as a prisoner, in order to get a true sense of the life of the prisoners and how the prison can truly become better.  Played by Robert Redford, this warden must fight the intransigence of both the prison bureaucracy and the prisoners themselves, and he soon learns why the prison is in the state that it is in.  The film is often too gritty for its own good, but it still manages to convey an important social topic in a unique and interesting way.

The soundtrack of Brubaker is both long and eclectic.  With over thirty tracks, it combines country music and a more traditional instrumental Hollywood score, using both heavy strings and piano.  The folksy elements of the soundtrack seem very appropriate for the environment of the film, and along with the effective locations and cinematography, this music does much to convey the mood and setting.  Composer Lalo Schifrin does a good job of weaving in suspenseful score at appropriate times to heighten the already tense feel of the piece.

Though the soundtrack succeeds in evoking the setting very well as well as convey the suspense and tension of the scenes, the music itself lacks thematic cohesiveness.  While the individual pieces work well for the moments within the film, they do little to unify the overall work.  Much of this comes from the fact that the pieces, though solid and competent, are simply not that memorable - one would be hard pressed to recall the Brubaker theme months after seeing the movie.

In conclusion, this soundtrack is certainly solid, but it lacks a strong and memorable score.  A buyer would need to be a very big fan of the film or Robert Redford to find this CD a worthwhile purchase.  Other buyers, even general lovers of soundtracks, should probably steer clear.