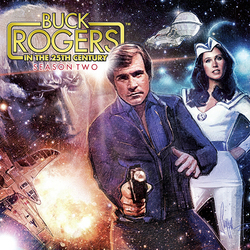 Intrada follows its previous release of Buck Rogers in the 25th Century - Season One with a four-disc set focusing on Season 2. The music for Buck Rogers' second outing was similarly a mix of old and new, as the show was considerably different from its first season. Larson's title theme was retained (albeit with new narration), and the roster of composers included the familiar names of John Cacavas, Herbert Donald Woods and Galactica veteran Stu Phillips, who had scored the pilot film.

New to the mix and scoring the majority of episodes was composer Bruce Broughton. Broughton ultimately scored more than half of Buck Rogers' second season, beginning with the premiere. The show incorporated more dramatic scoring and less lightweight material than Season One, resulting in more thematic structure and shape with numerous action sequences and colorful orchestrations to spare.

To premiere the music from Season Two, Intrada had access to Universal's three-channel stereo scoring session masters for every episode included in this album.