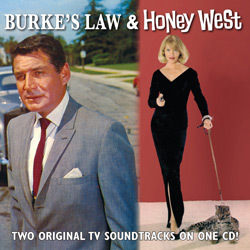 Both scores from these series which were hatched by Four Star Television had two of Hollywood's greatest (some would say wholly underrated) composers-for-hire, Herschel Burke Gilbert and Joseph Mullendore doing the musical honours. This sensational album puts music they scored, or was based on, these two shows.

In addition, we've tacked on ten further tracks from other shows from that stable of the late 50's—here for the first time on CD in their original stereo recordings with a disc-busting 76 minutes! Full notes and photos included.